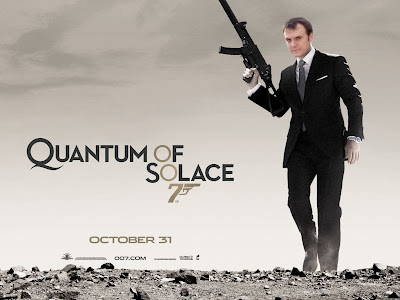 My mum babysat for us on Friday evening and I took Anne out for her birthday treat, to see the new James Bond film, A Bit of Peace and Quiet. (Her birthday is on Monday.) With the timing of Bond releases generally being in November, it's often what we do around Anne's birthday. She loves it, and that's why I married her.

Our expectations had been lowered for this installment, and in the end we quite enjoyed it. Like most Bond I'm in no hurry to see it again (I don't think I've seen a recent Bond film more than once, other than Goldeneye), but it was a fun way to spend an evening. It had possibly the laziest set up for an explosive finale I think I've seen:

Character 1: "Don't worry about the noise. It's the fuel cells powering up. This hotel is entirely powered by them."
Character 2: "That doesn't sound very stable."

Text book. An effort to make what is essentially gratuitous explosions justifiable.

On Saturday evening we had the guilty pleasure of watching The Transporter 2, which went to no such lengths to excuse explosions. Like other Jason Statham films this was a very enjoyable, take-your-brain-out, completely ridiculous action movie that made no effort to be plausible. It was in complete contrast to the new, supposedly-grittier Bond, but in the end they're both just as silly (OK, maybe Statham pips Craig in the sillyness stakes). Bond tends to achieve the "realism" by having such quick edits you don't get the chance to see what's going on in detail so don't have time to sit back and see how ridiculous it is. The Transporter 2 just revels in it, and somehow it works.
Posted by Stephen at 9:34 am