A song and dance

We're glad the snow has gone. ThingOne especially didn't like going out on the ice, so we ended up feeling stuck in the house.

Trying to get her out of the house would just turn into a song and dance.

(If the version below isn't HD and you're desperate for that, you can see it larger here.)

This video was supposed to be done by last Monday, to go online to celebrate ThingOne's fourth birthday. However, Windows Live Movie Maker turned out to be a dog (or to be more fair seems to have an issue with video created by the make of camera I have). After a few wasted evenings I turned to a trial of Sony Vegas Movie Studio 9, and thing I may now buy it.
Posted by Stephen at 10:41 pm 1 comment:

It's ThingOne's fourth birthday on Monday, and we had her birthday party today in our house. In previous years we've thrown a big bash in a hired hall for ThingOne, jointly with two other kids born in the same week. With many of the kids now having younger siblings, and entertaining four year olds being different to younger kids, we didn't do that this year. Instead we had a much smaller gathering with only five guests ThingOne's age, plus parents and siblings. It was a shame to downsize so much, but it was still plenty for us to handle!

It went well I think. Well, ThingOne enjoyed herself, and no one got hurt. Win! We started with some dancing games, and a few rounds of pass the parcel. I'd wanted to use some inappriopriate music (I'd suggested Creep byt Radiohead) but settled for Brown Eyed Girl, Yellow Submarine and Let's Stick Together. 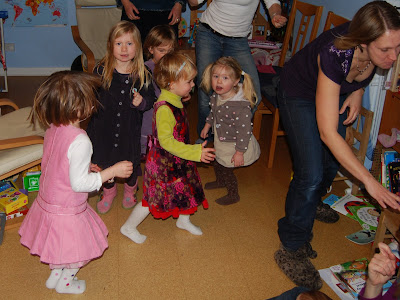 After pass the parcel, I took the kids into the front room for some more games. I'd got some modelling balloons and a pump from Amazon, and was aiming to learn how to do a balloon dog. I leaned first how to do a sword, and learned the dog later. By this morning I could do these two relatively confidently. I planned to give these as prizes for musical bumps, dead lions etc. I made a load before the party, since I figured making them each time would slow proceedings down and the kids would get antsy. As it was the baloons went down better than the games and it decended into me making dogs and sword in the requested colours. And the kids having baloon sword fights. The baloons I'd made beforehand are now making our house resemble a baloon graveyard. 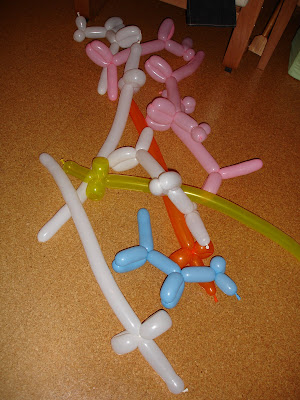 Anne made a castle cake (egg free, natch). She was happy with her baking, but not with the icing. Egg free cake tends to be a bit crumbly. It looked like a castle though, ThingOne recognised it as a castle when it was revealed, and the chocolate finger drawbridge was a big hit. 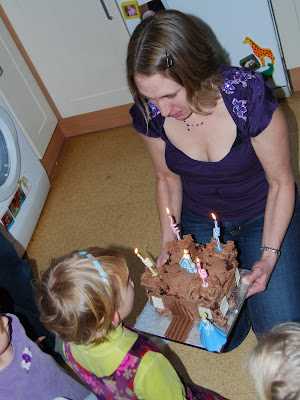