On Saturday morning I took ThingOne in to town on the bus. This was partly just as an adventure for ThingOne. She finds buses interesting, and doesn't go to shops very often so thinks they're wonderful. Especially John Lewis.

I had a job to do too though. I was looking for a new mobile phone for Anne for her birthday. Anne knows I'm getting one since she asked me to (and I needed to take her top up card in to ensure the extra credit I'd have to buy when I got the phone would go to her existing SIM, so she knew that's what I was getting on Saturday).

I wanted to see if ThingOne could keep a secret. At 2 3/4 I doubted she could, but, thanks to an episode of Charlie and Lola, she knew what a secret was, and knows that we try to keep birthday surprises a secret. I explained to ThingOne carefully that the phone I was buying was for Mummy, and we were going to wrap it up and give it to her on her birthday. I told her that we wouldn't tell Mummy about it before then as we wanted it to be a surprise. ThingOne understood, and was quite excited to be in this position of power over her mother.

When we got home, ThingOne didn't mention it. We told Anne we'd been to town, and that we'd seen some toys in John Lewis and been to a coffee shop, but that was it. I was quite impressed. I told Anne what we'd done and that I was testing ThingOne's secret-keeping abilities.

Later, when ThingOne and I were painting the farm (see previous entry) ThingOne blurted out to her mum, "Mummy, we bought you a phone today!" Anne tried hard not to laugh, and pretended she'd not heard ThingOne. "ThingOne! We're not telling her that. It's a secret!", I whispered. ThingOne thought she was very funny. She made a few more references to the phone, which Anne ignored through her giggles, and then ThingOne seemed to forget about it.

ThingOne and ThingTwo were having their dinner later, and Anne and I were sitting at the table with them chatting to them. ThingOne said to her mum, "Mummy, we're having dinner now, and then we can watch some TV and then we're having a bath and we'll wash my hair." "Yes ThingOne, that's right", Anne said. For it was.

ThingOne turned to me conspiratorially, and said, at normal volume, perfectly audible to everyone else in the room, "Daddy, I'm telling Mummy about my bath. I didn't tell her we bought her a telephone."

"Well done ThingOne", I whispered. Try to be quiet when you say that as Mummy might hear you.

"But Daddy", she said, louder this time, "I didn't tell her about the telephone, I was talking about the bath!"

Well, my suspicions were confirmed (and of course it would be very unfair to expect someone of ThingOne's age to keep a secret). At least we now know we can't let ThingOne in on any birthday or Christmas surprises this year. I feel a bit cruel for testing her like this, but I found it funny, and that's the main thing.

Some more photos. Firstly the crown ThingOne and I made on our Saturday Crafternoon: 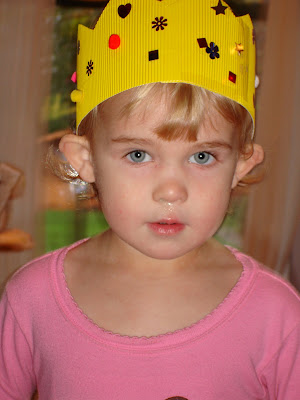 Here's the progress we made on our Farm Project today. Not much done as we were visiting a Granny, Autie and Uncle, but we made a pond and some ducks to go on the pond: 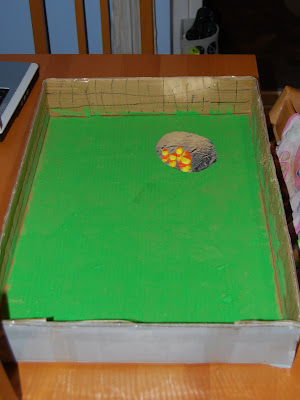 And here's one of ThingTwo, as she's got short shrift in this weekend's posts. She's coming on well though, and is trying to climb up everything (including managing a few stairs). She keeps trying to stand, which she can now do when she can pull herself up on something. However she then thinks she can let go. Which she can't. Much falling ensues. 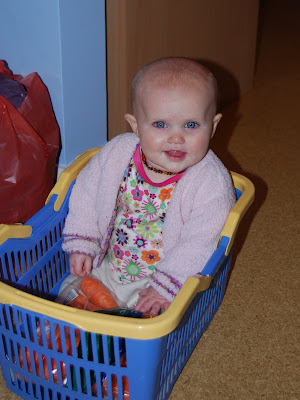