The Spawn of KT

Not a lot to say here. Anne's 13 weeks pregnant and we went for the "12 week" scan this morning and things are looking fine so far. Yay! Here are some pics: 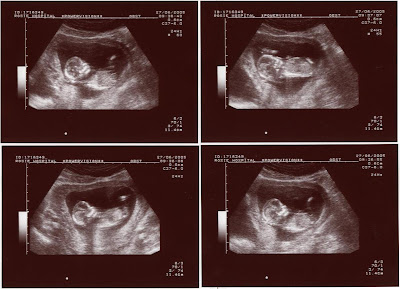 The Spawn of KT plans to come out and see us on New Year's Eve, all being well. Hurrah! I'm still in a slight state of shock having watched the little thing kicking and flailing on the monitor. We could see its face!
Posted by Stephen at 11:09 am No comments:

Cottaging in The Peak District

Yes, I know we've been a bit quiet of late. Here's another update though.

We've just come back from The Peak District. We hired a cottage in Butterton, a (very) small village in Staffordshire. It was a lovely little converted barn. Very cosy, and just what we needed. We did a lot of relaxing and slept late. We also did a fair amount of exploring.

On Friday we visited Chatsworth House, a bog ol' house with big ol' grounds. We didn't go in the house itself (we went to Wimpole Hall near where we live last week so figured we'd done stately homes for the week) but went round the gardens and had a baked potato with bean goulash (each!) in the cafe.

There was a maze in the gardens, so Anne and I split up and raced to the centre. I was there ages before Anne and could hear her grumbling about being lost as I sat on a bench feeling proud of myself and pretending to Anne I was eating both the chewey bars we'd brought with us. The first two photos in the diggy collage below are us celebrating in the centre of the maze (Anne did finally make it). We also had a good look round the kitchen garden. Their veggies are doing much better than ours. (In fact our fruits aren't doing great now either - we returned home to find our strawberry plants dying. We think they have a fungal infection. Grr!) Anyway, Chatsworth was quite good, but a bit expensive. We had to pay £1.50 to park, and also pay to go into the gardens. (Obviously we'd have also had to pay if we'd gone to the farm or house.) I can see why they charge for the car park, as I guess people go there and just sit on the grass and have picnics, but I reckon they should refund the cost of parking if you decide to pay to see the house, gardens etc. The Duke of Devonshire - take note.

Later on Friday we went to the nearby town of Bakewell and found ourselves surrounded by coachloads of old people. It's nice to feel young every now and then! We hunted down a Bakewell Tart to take home and have for pudding that evening, and also had a sneaky scone with cream and jam. Yup - it was THAT sort of break. The sort heavily punctuated with baked goods.

On Saturday we went to Matlock Baths and went by cable car the The Heights of Abraham. This was a couple of caves on a hill. There were good views of the surround area (from outside the caves) and we also had a baked potato there too. It was a good tourist attraction, and we got three hours' entertainment for our £9 (each).

That night we had an odd game of Jenga back in the cottage. It was odd because the tower refused to fall down and we eventually got the tower as high as we could with the blocks supplied. We tired of it and knocked it down, both winners. Or both losers, I suppose.

After a brief stop in the spa town of Buxton today, we drove home to Cambridge. I broke The First Rule of DIY when creosoting a fence when I didn't get changed into my DIY clothes and got creosote on my shorts and shirt. Grrr!
Posted by Stephen at 6:26 pm No comments: