Season's greetings and all that everyone. We're off to my mum's for a few days. I'll leave you with some photos of the girls meeting Santa last weekend. ThingOne was impressed, ThingTwo less so. 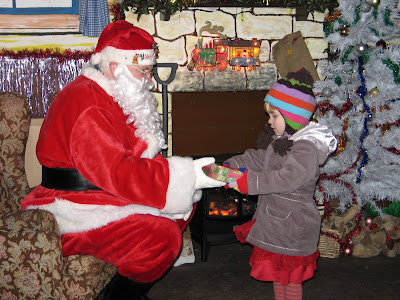 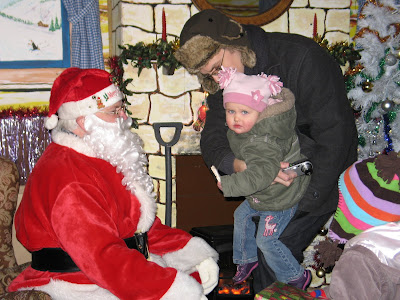 Posted by Stephen at 7:00 am No comments:

Simon says she's a sly one

On Saturday evening I was getting ThingOne dry and into her pyjamas after her bath. This can sometimes be a fraught time, with the girls tired and their parents tired too. I entertained ThingOne with a new game.

"Do you know how to play Simon Says?" I asked ThingOne?
"No."
She'll enjoy this, I thought. I explained the rules to her once, but knew the best way to teach it to her was to play it.

I was flabberghasted. Surely I could outwit a three (nearly four) year old at Simon Says. "Are you sure you've never played this before ThingOne?" I asked.

"We play it at nursery Daddy. I was tricking you."

I was shocked. I don't think she's ever shown such concious deception and trickery before. I think we may be in trouble here.

I'll teach her to play Risk next. Surely I can win at that?
Posted by Stephen at 8:53 pm No comments:

ThingOne's a panto diva (Oh no she isn't!)

My mum got tickets to the Welwyn Garden City pantomime for Saturday. She and I took ThingOne along. I was unsure whether ThingOne was old enough for a panto. I figured she'd be OK but you can never tell. It was perfectly possible she'd be bored or scared and wanting to leave after ten minutes.

The panto was Snow White and the Seven Dwarfs. She's into her Disney Princesses (shudder) so that gave us a better start than, say, Aladin. She was most impressed when Granny gave her a Snow White dress to wear there. Having been to play barns and kids' parties over the last few years I fully expected ThingOne to be one of many girls there dressed in these ubiquitous outfits. As it was there was just one other little girl dressed as Snow White. There isn't a Disney Store in WGC, so maybe these clothes aren't as widespread there as they are in Cambridge (though I notice you can get then in Sainsburys and Tesco nowadays).

As we walked in people were commenting on her dress, and ThingOne strolled through the foyer seemingly unfazed by all the affection, as if saying "Yes, I'm a beautiful princess. Deal with it."

We were soon approached by one of the staff who asked if ThingOne would be OK with going up on stage at the end of the show to do the teapot dance (not a request I often get myself when visit the theatre, but I live in hope). They gave me a numbered card, and I warned the lady I didn't know how ThingOne would cope with the panto and we may have to leave early. She told me that was fine, they always lose a few and that there were three loud bangs in the show. 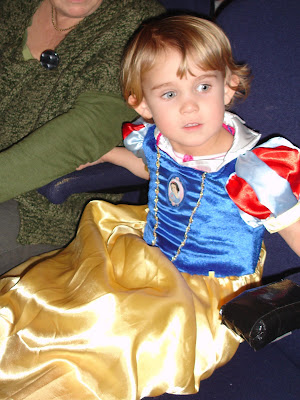 ThingOne enjoyed the show a lot. She was taken aback by the first bang, so sat watching the show with her fingers in her ears until the third bang had passed. Other kids were scared of the baddies, and I heard a couple screaming they wanted to leave, but baddies don't really bother ThingOne (she's fine with them in Disney films and anyway panto villains are at about the level of Robbie Rotten in Lazytown, ThingOne's current favourite show on TV).

She kept asking if it was time for her to go on stage yet. I was a little concerned. If she was scared of loud bangs, how would she cope with going onstage in front of hundreds of people and performing. It was a long show - about two hours and twenty minutes in total, but when the time came for the four chosen kids to go on stage I took her to the steps and she went up to meet Muddles, the child-like main character. He complemented her on her dress, which again she took in her stride. ("What? This old thing?")

He asked the kids questions, and a copuple were too shy to answer. ThingOne had no problem, and answered. He asked some kids what they'd asked for for Christmas. I was hoping he'd ask ThingOne, since her plans had now been thrown out as she'd been planning to ask for an umbrella and a princess dress. She'd now changed that to an umbrella and (for some reason) a mouse outfit, which I thought would sound suitably odd. He didn't ask her that, but she answered his questions confidently and then proceeded to do the teapot dance ("I'm a little teapot...") with aplomb. She was the youngest (and by far the smallest) on stage, and I suspect the shyness shown by a couple of the other kids will come with age. ThingOne didn't seem affected by performing in front of hundreds, I'm guessing partly because she couldn't see much of the audience due to the bright lights.

I got my camera out to take a photo. My mum told me I wouldn't be allowed to take photos in the theatre. I realised she was right. I took one anyway, got told off by a member of staff and said I had no idea. I got a photo out of it, and realised I'm one of those parents who thinks the rules don't apply to me because my child is special.

ThingOne was given a goody bag to leave the stage with, in which she showed no interest even though it contained a balloon and a chocolate selection box. She acted as though it was all nothing while it made her granny's and my day. 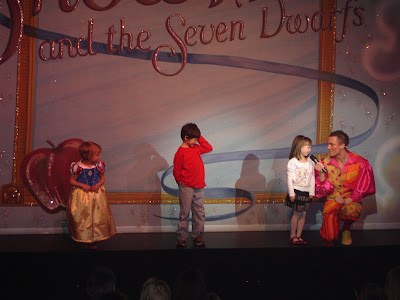 Posted by Stephen at 5:24 am No comments:

What would Brian Boitano do?

On my first off four days off between jobs today I took ThingOne to the ice skating rink that's been put up on Parkers Piece in Cambridge.

ThingOne saw it a few weeks ago, and having seen ice skating on Charlie and Lola decided she'd like to try it. She was very excited this morning when I told her what we were doing.

Ice skating is tricky, so I figured she may not take to it, and that we may not use our full allotted hour. Our session started at 10am, and we arrived early. We were allowed to go on the ice early, since it was already open and not busy.

Within five minutes ThingOne had uttered the phrase "I never want to go ice skating ever ever again!"

Great. It was only ten minutes to ten. Not only hadn't we lasted the hour, we hadn't even reached our start time. She didn't even fall over. She didn't have the chance. 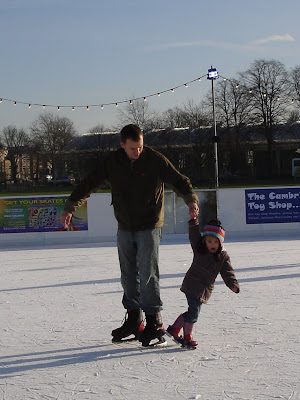 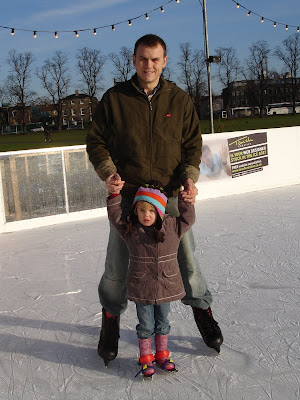