Sun, sea and snacks in Norfolk

We’ve just returned from Sheringham, North Norfolk. We hired a cottage there for four nights. We figured the girls would enjoy a trip to the seaside. We did a similar thing when ThingOne was ThingTwo’s age (14 months), and whilst the days were a lot of fun the nights were hard, with ThingOne waking a lot due to teething. We were so tired then that we contemplated coming home early.

Fortunately ThingTwo slept much better, despite her also trying to push some teeth through. This is good since we need a lot of energy to cope with the two girls, and the full nights’ sleep were essential.

ThingOne was walking at 14 months, whereas ThingTwo isn’t yet (standing well, and taking steps when she feels like it, but really showing little interest and preferring to crawl). This meant she was at a very different stage to ThingOne at 14 months, but still seemed to have a great time and basked in the extra attention she was able to get. Every now and then she'd take a few steps, and convince us she was about to start trying to walk a bit more, but she's been doing this for a month now and still doesn't seem very keen.

This post is quite long and has more detail in than we normally post, but we wanted to remember it, so suck it up.

On our way to Sheringham we stopped off at Thetford Forest for a break and a picnic. There was a trail there where ThingOne could lead us to the next animal-shaped climbing frame by following arrows. She had a great time, and where we could we let ThingTwo crawl through and over things too. She especially likes slides and seems to love going down them as quickly as gravity will allow.

ThingOne was particularly keen to explore the ‘holiday home’ when we arrived in Sheringham. She was astounded by the bunk bed in her room (‘it’s like Peppa Pig’s!’) and declared she would be sleeping on the top bunk. After a quick play up top the reality sunk in and she decided it would be best if she slept on the bottom bunk. I helped her to feel like this was less of a literal and figurative climb-down when I hung a duvet from the top bunk to make her a ‘tent’ of the bottom bunk. This was now her Bunk Bed Tent, which lasted for one night before she decided that wasn’t best for her either. Chuh, women.

A quick walk to the sea before dinner. ThingOne was keen to paddle, with no thought of how cold it would be. We had to explain that there was no time and she could paddle another day. Sheringham has a pebble beach, and we’d heard that nearby Cromer had a sandy beach which sounded more suitable.

Aside from paddling in the sea, ThingOne had also declared that since we were on holiday there would be swimming. We didn’t need to discourage this since we’d heard that Sheringham had a good indoor swimming pool (‘The Splash’) with a wave machine and water slides. We trekked up to the pool on Tuesday morning. ThingOne was very excited.

We arrived to speak to a surly woman behind the counter. If she’d have been eating a banana as she spoke to us she’d have been a match for the lady at the desk in the swimming pool sketch on The Day Today. Having let some people jump the queue in front of us she told us that we couldn’t go swimming now since there pool was only available for public swimming during limited sessions in the day. She was pretty abrupt and we found we had to ask the right questions to get the information we needed to find out when we could swim. I saw a sign for a café in the building. It would have been quite a wait, but I asked the rude woman if we could get a coffee while we waited for the pool to open to the public. “The café’s been closed for ages” she said, clearly astounded we didn’t know this. She’d never come across non-locals, it seems, despite working in a touristy seaside town. Cow. Anne and I were pretty peed off, as much by the service as by being unable to swim after our trek. ThingOne was surprisingly chipper.

We wandered back into town, Anne and I in a bit of a grump. Bloody British service. Our faith in British tourism and good luck was restored when we happened upon a steam train about to leave the station. We bought (pricey) tickets and hopped onto the train. Both the girls enjoyed this. We only went to the next stop. There we looked around the station at some Croft and Perry exhibits. It seems some Dad’s Army and Hi-Di-Hi scenes were filmed there, this being a relic from olden times. ThingOne and ThingTwo didn’t seem very interested in this, so we sat by the edge of Sheringham Park and gave the girls their snack, looking at horses in a field. ThingOne saw some horse poo. This was possibly the high point of the trip for her. We got the next steam train back to Sheringham. 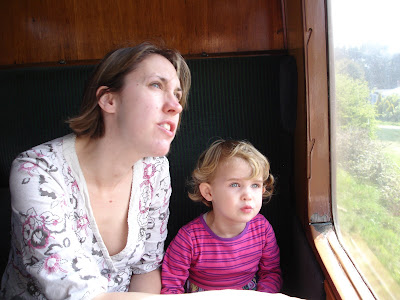 In the afternoon we tried swimming again. The timetable said we had a one hour window between 3pm and 4pm during which we’d be permitted to pay a large amount to swim. I was trying to coax ThingOne to tell the woman at the counter that the woman this morning hadn’t been very helpful, but that didn’t work. Disappointingly the woman at the counter in the afternoon was very helpful and friendly. How am I supposed to get worked up if people are going to be reasonable and professional?

Fortunately the lifeguard was a miserable, unhelpful cow, so all was not lost.

We spent Wednesday just down the road in Cromer. We didn’t have any crab (I gather we committed some kind of faux pas by doing that) but we did lots of other things. We went to Lifeboat Museum, the pier, the Cromer Museum, and to the beach.

ThingOne was keen to go for a paddle in the sea, since That Is What You Do At The Seaside. We warned her it might be cold, but I dutifully rolled up my trouser legs and went in with her. I thought a cursory paddle would suffice, but once I’d got out ThingOne carried on paddling and splashing for ten minutes or more. She was having a great time and seemed to have no notion that it was Bloody Freezing.

Both the girls seemed to have a great day, and the fish and chip lunch we had was probably the biggest hit of the holiday. Both of them devoured their food, and sat nicely throughout the meal. We were near the door, which meant ThingTwo could wave and flirt with everyone who went past. This probably bought us an extra twenty minutes of good sitting-down-and-eating-dinner before she got fidgety.

By 2.30pm we figured ThingTwo would need a nap. I’d thought that one of us could do something fun with ThingOne while the other pushed ThingTwo along the prom in her pushchair. It soon became clear though that ThingOne was shattered, and we had nowhere to put her. She asked to be picked up, and within a minute had fallen asleep in my arms. I don’t think she’s ever done that before. Maybe when she was ill I suppose. For half an hour we wandered around as our girls slept and my arms and back ached.

After her nap, ThingOne had a Mini Milk lolly. This to her is a dream come true, and she now thinks it must be summer.

On Thursday, after a quick search for a Geocache in some ruins, we went to nearby Priory Maze and Gardens. This is a fairly small ‘attraction’ with gardens and a hedge maze. We had some fun in the maze and there were letters and statues of monks to find. This seemed to keep ThingOne’s interest for a fair while, and the snack in the café had us all interested. (Scone, cream and jam for me. I think the appropriate word would be nummy.) 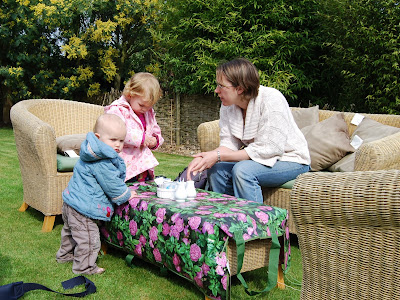 We drove to Holt in the afternoon. It’s a pretty village and we wandered around for a while. ThingTwo and ThingOne both enjoyed spotting dogs there. We saw a kid about ThingTwo’s age who was toddling around. I wondered if this might encourage her to do some walking. I put her on the floor and she immediately sat down to eat stones. Joy.

We had a really nice coffee and snack in Byfords, a decent café in Holt. Having already been for a snack in the morning we felt a bit guilty, so bought a piece of millionaires shortbread and shared it between the four of us. I had the largest share, but Anne’s hot chocolate was practically a meal in itself.

While ThingOne wound down to some of Sleeping Beauty before her bath that evening I took ThingTwo in the backpack for a walk up the cliffs near Sheringham, in search of another Geocache. We were successful (I did most of the searching if I’m honest) and the view was great. It’s been a long time since I’ve had a two cache day. Bonus!

Anne suggested we go swimming again before the drive home on Friday. I wasn’t keen to give the pool any more money, but as soon as ThingOne woke up she asked if she could go swimming one more time before we left. That swung it and we all went for a splash around.

It’s not relaxing taking young kids on holiday, but this was a lot of fun, and we really lucked out on the weather. It was sunny and pretty warm each of the five days we were away. Given that the previous week had been grotty we felt pretty fortunate for this. If it had been wet what would we have done? More coffee shops and snacks I imagine.
Posted by Stephen at 8:12 pm No comments:

Since having kids I don't get much time to myself. My daily commute to work has become my sanctuary. It's my 'me time' when I can feed my addiction to podcasts and relax.

I took the train to work on Tuesday so Anne could have the car for the day. She was taking the girls for an Easter Egg Hunt at a friend's house in the afternoon.

The walk to the station and into work was a nice change for me, and it was a pleasant morning. I listened to my podcasts whilst getting some excercise. All was well.

Anne was going to pick me up from work at 6pm, following the Egg Hunt and kids tea, and I would drive them home to get the kids in the bath. I was looking forward to being met from work by my three ladies, so when Anne called to let me know she was about to leave to pick me up I was happy.

Then I got another, more frantic call from Anne. As Anne had neared my work ThingOne had thrown up all over herself and the car seats. She gets a bit car sick sometimes, but this is ridiculous. Anne had to stop in a lay-by and clean up ThingOne and the car, and I trudged down the road to meet them.

My expectations of a fun drive home with company were not met. Instead I had a miserable ThingOne, a screaming ThingTwo, a stressed Anne, and a car that smelled strongly of sick.