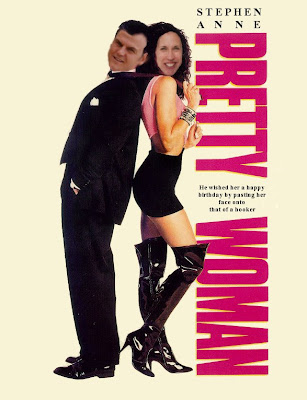 You'll have guessed that I've been spending time with a photo manipulation tool lately (and funnily that's exactly what Anne's been calling me). My software of choice is GIMP (and funnily enough, etc etc). Once I got over an initially steep learning curve it was fairly easy to use, though I couldn't get Anne's face right on the picture above, and eventually gave up trying, realising I was spending too much time on something Anne may even not care much about.

But this post is about Anne, not my PC adventures. It's her birthday today. Happy birthday Anne!

ThingOne knew Anne's birthday was coming up and was asking about the party. Ah. We weren't planning one. But Madam expected one, since that's what you do on birthdays. So we had to have a party. While ThingOne was napping on Sunday afternoon, Anne baked a quick cake. When ThingOne woke up, I told ThingOne that I'd secretly baked mummy a cake and ThingOne could help me decorate it. I kept Anne out of the room (she knew exactly what was happening of course) and we decorated the cake (many a hundred and thousand), blew up balloons (me, mainly) and put a Happy Birthday banner up.

We called Anne in. She and ThingTwo came in and ThingOne and I "surprised" Anne. We sang Happy Birthday and Anne blew her candles out. ThingOne gave her mum the Paint-Your-Own-Mug I'd got and had got the girls to help me decorate. The four of us had a nice little party. 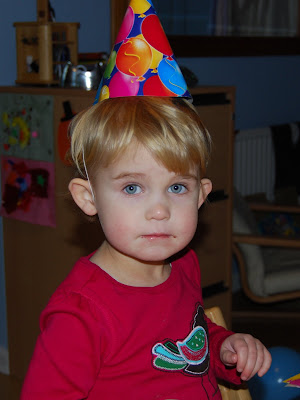 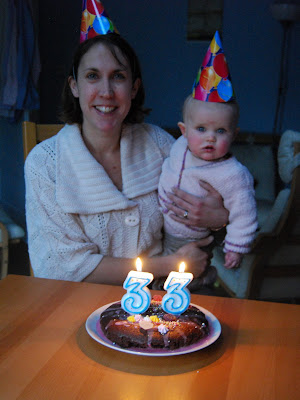 I'm detailing this party to illustrate a point I'll make with this question: how much of this was really for Anne? Anne enjoyed it, no doubt, but of course this, as with much of our life, was mainly for ThingOne's beneift. We ate an egg-free cake (ThingOne can't eat egg) with too much sickly cake decoration on, and wore party hats for her benefit. Not that we mind - ThingTwo enjoyed it too and it's great to see the girls having fun. I explained to ThingOne that this was all for her mum, and that it was her mum's special day. I think the message got through, and she gave her mum some nice hugs, telling her she was special. Bless her.

We then all went to Nando's for an early dinner (early for Anne and me). Again, the girls had a great time. As did we. Nando's is a guilty pleasure, especially since we gave up fast food chains years ago. (Nando's is able to avoid our biycott by having proper plates and cutlery, and semi table service. I suppose you could argue that Nando's is to KFC what Wimpey is to Burger King).

We don't go out for meals together much, and never dinner (except on holiday). This, of course, involved getting the staff to go through a special book they keep on the ingredients of everything they have so we could ensure there was no egg in the things ThingOne was going to eat (it's a minefield going out to eat with allergy-ridden kids). ThingOne didn't want much chicken, so basically ate chips followed by frozen yoghurt. Yes, that night we were those parent. Hell, it's a birthday. ThingOne had a great time, but the come down may be hard on her.

I hope you had a great time too Anne. Again, Happy Birthday!
Posted by Stephen at 7:00 am

Hey Anne! Glad you had a good party yesterday - hope you have a lovely day today.