On the weekend following my mum’s surprise sixtieth birthday we went to Centre Parcs. The choice of destination was largely determined by not knowing where to go with a baby. We didn’t fancy being in a hotel room with ThingOne, having to be quite so as not to wake her up and not being able to stray far when she’s asleep at night. Some friends recommended Centre Parcs, and we’d never been so thought we’d give it a try.

It worked out well. With my mum, sister and brother-in-law there we had five adults to entertain ThingOne, which kept her fairly happy, and there was a fair amount for us to do. Anne even got a morning at the spa, which I think is the most time she’s had off in six months. We took ThingOne for a swim each day, which she loves. Anne takes her to the local pool each week for a baby session, so it was nice to be able to do it myself. ThingOne didn’t really make the most of the facilities. Her bike riding is rubbish, and her abseiling woeful, but I think she enjoyed herself.

She’s just starting to notice animals. A few months ago I showed her some ducks and swans and she didn’t react (until a swan got angry at her and ThingOne started crying). I don’t think she registered them as unusual. Now though, she’s fascinated. When we arrived at our chalet/cabin there were loads of ducks and ducklings outside and ThingOne was happy to look at them for ages. The view from our lounge window was like a scene from a Disney cartoon, with ducks, squirrels, rabbits and birds looning about. (Not sure which Disney cartoon I mean, but it was more Bambi than Aladdin.) 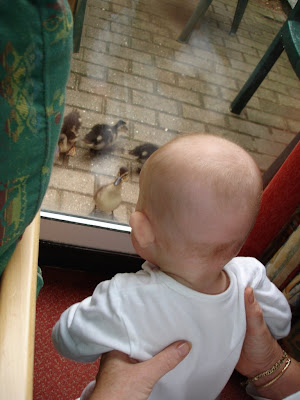 My mum and I took ThingOne out in a pedalo while Anne watched a football match (an England World Cup game). We thought ThingOne might find it cool being on the water, but she was more interested in watching our feet as we peddled. She looked a bit ridiculous in her life jacket, so at least we had a laugh at her expense. 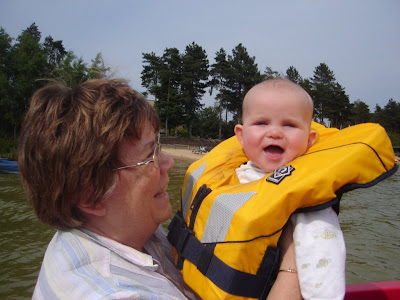 Posted by Stephen at 9:25 pm No comments:

My first Father's Day (as a dad), and ThingOne was kind enough to buy me a book ("Freakonomics") and a mug with a picture of the two of us on. Good girl.

Anne had started giving ThingOne some solids a few days before, so on ThingOne on Father's Day I got to feed ThingOne some mashed up pear. She seemed to enjoy it quite a lot, and even managed to get some of it in her mouth (the rest was coating my shirt and trousers, ThingOne's face and clothes, the chair, and my mum's patio). 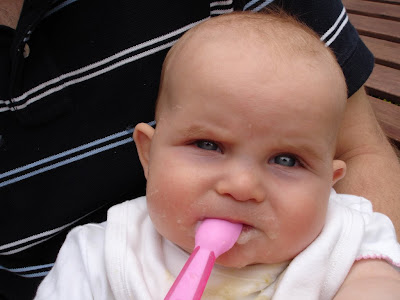 Part of the reason there was so much pear sprayed everywhere was ThingOne wouldn't let me feed her. She insists on grabbing the spoon and putting it in her mouth herself. She has a pretty good hit ratio, though also likes to take it out of her mouth and wave the spoon around after. My mum, the proud granny, said "She's feeding herself - how many five month olds can do that". Her cousin Jan, who has five grandchildren of her own, tactfully said nothing. She probably knows as we do that ThingOne would anything you gave her straight into her mouth, so it's not too amazing for her to put the spoon there. If ThingOne had been handed a worm she'd have put that straight in her gob and my mum would have been less impressed. 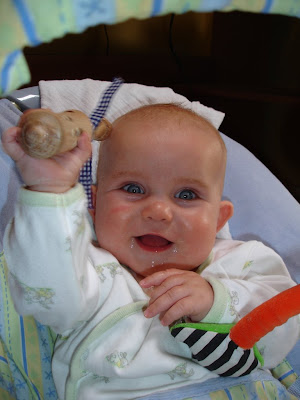 For my mum's sixtieth, my sister and me (and our spouses), in cahoots with my mum's cousin Jan, threw her a surprise birthday party at her house on the preceding Saturday (meaning she got to tidy up afterwards).

I was surprised but chuffed that she didn't guess there was something going on. Jan had arrived in the morning and insisted they went out, and I rang mum on her mobile around 1.30pm to say Anne, ThingOne and I had popped in on the off chance. We'd previously said we'd come for lunch on the Sunday and I now told her we could no longer make that. I felt bad lying to her, but we knew mum wouldn't want to miss seeing ThingOne, and she and Jan raced back. Mum was pretty shocked by the crowd who greeted her when she got in. 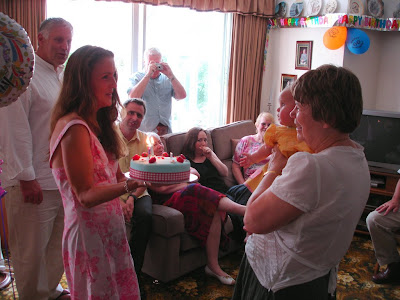 It was all great fun. Good to see her surprised and good that everyone wanted to make the effort to give her a good day. Mum seemed to enjoy herself. As a bonus she got to show her granddaughter off to her friends and family for the first time (for most). ThingOne wasn[t in a very good mood though as it was too hot for her, poor hot Bean. 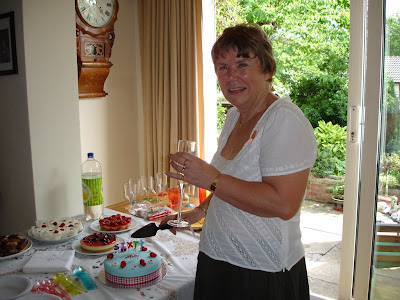 Posted by Stephen at 9:59 pm No comments:

And so it was that following a few days in Copenhagen, the following Sunday I flew out to Frankfurt to run some more training. I flew to Frankfurt Hahn airport with RyanAir. This is one of those airports that is nowhere near the city which it pretends to be in, so it took me an age to get to town. I'd arranged to meet up with a guy I used to work with at my current job who lives in Frankfurt. He was able to tell me a bit about the city and show me around, so it was more enlightening than my Copenhagen trip.

There were a few people from other offices around Europe attending my training, so I had some company in the evenings. However, they must think I'm a monkey:

In Copenhagen I changed the clocks on my phone, PC and watch to local time, and consequently missed a meeting when Outlook didn't remind me in time when I returned to the UK. Oops. So, when I got to Frankfurt i changed the time on my watch, but not on the PC or my phone. On the first day of training people were asking me how late the training would go on. "Not late", I said, seeing that the time on my PC was only 5.15pm. Only when I got back to the hotel and arranged to meet people for dinner did I look at my watch and realise I'd kept them in class until 6.30pm. Oops again.

I didn't endear myself when everyone was waiting for me in the foyer of the hotel for 15 minutes before phoning my room to wake me up. of course I'd set my phone alarm and slept for an hour more than I'd planned. 32 years old and I can't cope with a new time zone. I am a fool.

No photos of Frankfurt, but while I was there Anne sent me a very cute photo of ThingOne to tide me over until I saw her next. She is a poseur. 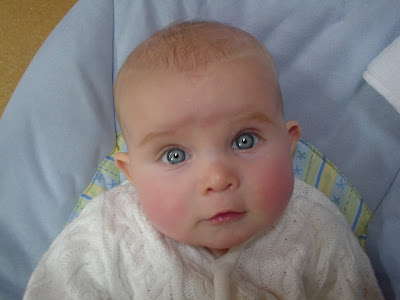 Posted by Stephen at 8:35 pm No comments: