Sometimes I think my digital camera is great, and then I see what an SLR can do.

See the shots of some of the babies at Friday's party at this blog.
Posted by Stephen at 8:15 am No comments:

We had a party for ThingOne yesterday afternoon, along with two other babies who turned one this week. (Are one year olds still babies?) We hired a church hall, and a load of mums with babies turned up for some food, frantic play and surprisingly few tears.

It's interesting for me to see ThingOne amoung other babies, and to see what Anne gets up to in the week (parties, food and drink by the look of it). It's also good to see what other babies of ThingOne's age are doing. We tend to like to think ThingOne is very advanced but of course what different babies can do at one varies wildly. ThingOne's lack of hair makes her look very much like a baby still, whereas other one year olds are looking like little boys and girls.

ThingOne was a bit grotty (teething? we always say that) but I think she enjoyed herself, that is assuming enjoyment can be measured in the number of breadsticks she ate.

I'm giving Picasa web albums a try, as they look pretty good, so click on the photo below to go to the album. There's a good slideshow option. There are far too many photos on here, so don't feel you have to look at them, especially if you don't know the people in the photos! The year of the ThingOne

We're feeling pretty happy today, thinking about the last year. Our lives have been pretty different to before, and we've had an amazing time watching her grow (not that it wasn't difficult and tiring at times!) It's hard for us to imagine what she'll be like in another year.

We've bought her a push-along trike for her birthday, and she'll be having a party with some of her baby friends on Friday. 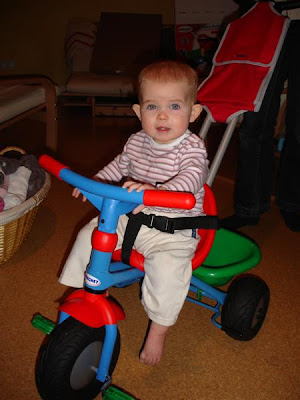 To give Anne and me a chance to reminisce, here's a four-minute video (with sound) of ThingOne's first year (assuming YouTube isn't down, as it was when I first tried to publish this).

Thanks go out to our friends and family for being supportive and putting up with our exhaustion in the last year.

Happy first birthday ThingOne!
Posted by Stephen at 7:00 am No comments:

I don't know why I've not added video to the blog before, but I haven't, and now I have.

ThingOne's started trying to stand last Saturday, and on New Year's Day took a few steps. She's not entirely steady, but has been doing a lot of practicing and seems to enjoy it. Here you can she she even dares peform a quick spin!

Posted by Stephen at 7:58 pm No comments:

Another year in DVDs

As ThingOne nears her first birthday, you're probably all wondering what movies we've rented in the last year (or since my last DVD post here). Since we've not been to the cinema much in the last year, we tend to wait until movies are out on DVD. To be fair we often did this before The Bean came along anyway.

The list is below. Not as many this year, obviously. We've stopped and started our Amazon rental contract as our time has allowed, but still seen some great films (and some rubbish). The contract is on hold at the moment, but I have some good titles on my list to watch, so I'm looking forward to starting it again in the next month or so.