Here's the proof of my trip to DC. First a ironic riff on the traditional tourist shot in front of the Capitol building. Note the clever, knowing air that surrounds the shot. 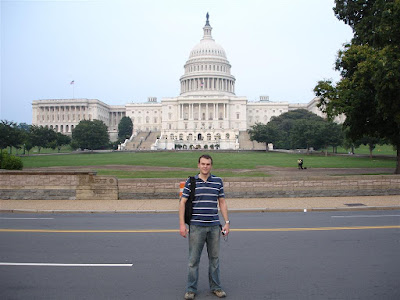 And here's the tour I'd like to go on. The Segway Tour! 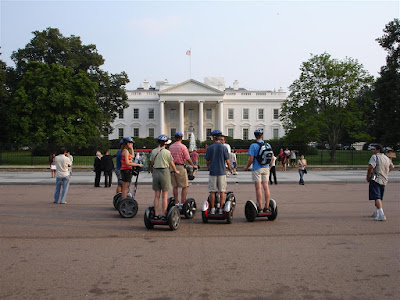 Posted by Stephen at 4:31 pm No comments:

I’m over in Washington DC at the mo with work (actually I’m next door in Arlington, VA, but let’s not split hairs).

I flew out on Sunday from Stansted. Unusually for my firm we were allowed to go business class, since MaxJet offer “business class seats at premium economy prices”. There was certainly a lot of legroom and the seats were comfortable, but I didn’t think their service was up to much. The stewardesses didn’t seem to be able to hear anything I said and got a bit shirty with me. Charming.

I was travelling with a guy from work who used to work for Airbus. As we sat in the (business class!) lounge before boarding he looked at the registration number of the plane on which we’d be travelling and looked it up on a plane-spotters website. Within seconds he had a page showing photos of the plane through its life with various airlines’ logos on it in former lives. (See the link here)It made me feel very safe to know it was over 20 years old.

Inside the plane, its age hadn’t been hidden that well. It had been done up of course, but not exactly brought up to date. The seats were quite far apart, so rather than have a TV in the seat in front of you they give you a fairly hefty (and I suspect fairly old) personal media player. I’m sure their web site boasted of a choice of hundreds of movies, but in fact there were only 10-15. Many of them were quite old and I watched Firewall (pap, but ideal for a plane journey) and the musical remake of The Producers (pointless, I’m sure it was good on stage, but most of the funny bits are from the original movie and the songs aren’t great so watch the original. Matthew Broderick does a fair impression of Gene Wilder, but Gene Wilder did a better one).

What annoyed me was, while the media player had a widescreen screen, all the movies were 4:3. (They even carried a message beforehand saying “adapted to fit your screen!) Madness. Therefore you had a choice of either watching it in the proper ratio and having a third of the screen unused or watching it stretched with everyone looking short and fat. I of course opted for the former, though looking around I see most other people preferred the latter (or more likely didn’t notice).
I arrived in my hotel in the Arlington area to find a nice big LCD TV in my room with HD services. Joy! However, the picture looks pretty rubbish, so I don’t think it’s set up properly. Grr!

OK, so I’ve figured out that I am getting an HD signal on four channels in the room, but the colours (colors?) are far too bright so the picture doesn’t look very good. Shame.

My trip here isn’t all moaning about the signals and ratios on TVs of course, I also went to the pictures to see Superman Returns. With a six-month-old baby at home the only time I get to the movies nowadays is when I’m away with work (unless I take a Wednesday off to go with Anne and ThingOne to the mother and baby session at the local cinema). SR was good. It seemed a little constrained by the original movies, which I thought was both a good and bad thing. It could have done with a little updating IMO.

After four days of work and eating out in the Ballston area of Arlington in the evenings, on my last night here last night I went with a colleague into DC itself and saw some of the sights. The buildings of government are certainly impressive and there are some nice wide green areas (the green is grass). Like many American cities I feel like I already know it, having seen it in so many movies (and of course The West Wing) so walking around it I got a feeling of strangeness and familiarity.
I’m flying back to the UK tonight, arriving back in Stansted at 7am. Having only just got used to the time zone here I imagine the weekend will be a fun mix of tiredness, exhaustion and lying awake at night.
Posted by Stephen at 7:47 pm No comments: