There haven't been many photos of ThingOne posted recently. This is because we had my mum's diggy camera on loan for a few weeks and managed to get some good shots. Since then I've only had my diggy camera, which isn't as good and the photos don't seem as good.

I keep meaning to get a reasonably decent diggy camera, but I can't seem to find the time to read up on them to figure out which one to get. There are so many variables. I don't need a top of the range one - just 4-5 megapixels. That should suit most needs shouldn't it. The important thing is it needs to be able to take decent photos without a flash more often than my current ones. I keep upsetting ThingOne with the flash.

Last weekend Anne's sister Kerry visited with her boyfriend Mark. Mark has a very good camera, and we got some nice shots of ThingOne. So here are a few.

ThingOne likes looking over people's shoulders, so this is a view we see a lot of. 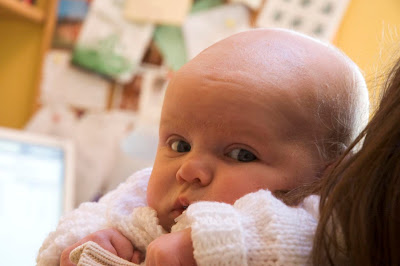 She looks wise beyond her weeks in this one below. 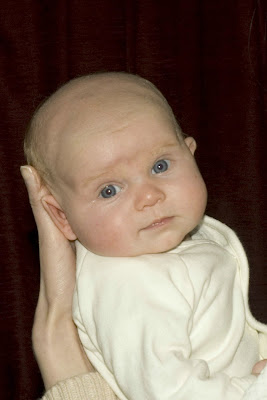 ThingOne seemed to like looking at Mark a lot. Given that she was similar with my brother-in-law, Chris, I reckon she must have a thing for beards. 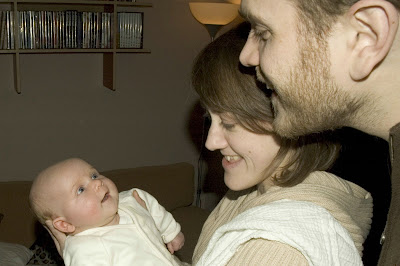 This one isn't done with Mark's camera. You can probably tell by the quality. However, it shows how much ThingOne likes the new mobile we bought her last weekend. 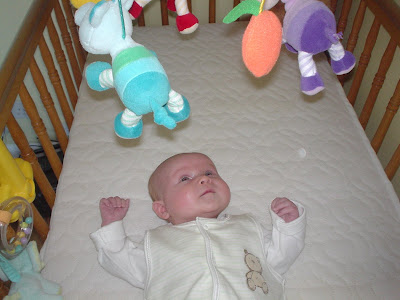 Posted by Stephen at 7:30 am No comments:

Oh dear, ThingOne's losing her hair. She had lovely blonde/brown/red hair, and it's falling out. The top of her head is now mostly bald, and she has a bald patch round the back too. She looks slightly ridiculous, I have to say. Poor ThingOne.

ThingOne has more nicknames than you could shake a stick at. Well, several, so I guess that depends on the size and weight of your stick.


-The Bean, or Beanie, or Beanster. Obviously.
-Logan, as she looks like Michael York in Logan's Run when she's in one of her white sleep suits.
-Baldy Baby. See above.

I had a fright the other day when Logan did some projectile pooing when I was changing her nappy. It flew across her change table! Amazing. Anne tells me of a friend who knows of a baby whose poo once squirted six feet, so now I'm getting competitive. Come on Baldy - you can do it!
Posted by Stephen at 1:29 pm No comments:

There IS still good in me...

I got to have a short cuddle with ThingOne this morning when Anne nipped to the loo mid feed (I generally don't get to see much of ThingOne before I leave for work). Her (ThingOne's, not Anne's) bum exploded mid cuddle, so I gave her back to Anne and said I had to leave for work. I am a terrible father.

Throughout Anne's pregnancy I would say to her tummy, in a booming voice, "I AM YOUR FATHER BEANIE. JOIN ME AND TOGETHER WE CAN BRING ORDER TO THE GALAXY!"

Like Darth Vader in The Empire Strikes Back, obviously.

I suspect ThingOne enjoyed this while inside, but the fun is multiplied now (by a number greater than one). First, she sometimes cries like a baby like Luke does in that scene. Second, initially her sleep suits were too large for her and her hand wouldn't be protruding from her sleeve, making it look like it had been lopped off by a lightsabre.

I then tend to throw her in the vast expanse of Cloud City where she may or may not fall through some tubes and get rescued by the Millenium Falcon. (Of course I don't really do that last bit. That would be silly.)
Posted by Stephen at 9:10 am No comments: