You'll remember that on Saturdays I take ThingOne to her Melody Bear dance class. (Didn't remember? Keep up!) Like most kids' activities there were no classes over the summer, so there's been less structure to our Saturday mornings recently. I'd been looking forward to the classes starting up again, since ThingOne really enjoys it and I like taking her.

The class started again recently, and on Saturday I took her along. She's now in the next class up, 30 minutes later. A bit more serious this time and many of the kids now have the requisite kit (leotards for the girls) so I expect we'll be splashing out soon enough.

The other kids had been already this term, but ThingOne hadn't as we've been away. I was disoriented to find that parents are no longer allowed to sit at the side of the room and clap and encourage their kids when they're in the zone, or cuddle and console them when they're sad. When I realised this was the case I took ThingOne aside and explained that I'd just be in the next room and she'd probably see me through the glass door. She was a little confused.

I went into the parents' area feeling low. Poor ThingOne. I didn't think she'd enjoy this. It's been a long time since she ran to me during the classes, but she often looked over for approval or gave me a thumbs up. I suspected she wouldn't like the class as much. Plus, this was our Saturday morning activity and I'm now excluded. I admit I was a little put out. Were my Saturday mornings now going to be spent waiting in a room in a primary school unable to get near my daughter? (OK, so it's only 30 minutes. I was being overly dramatic.) I was pretty sad watching what I could through the glass door.

As the class went on, I could see that the kids were much more attentive than usual, and enjoying themselves a lot. ThingOne seemed to be more a part of the group than she normally did, though that could just have been an issue of my perception. Not having their parents there focused them a lot more, and I could see that it was clearly the right move. I realised that I was the only one of ThingOne and me who had a problem with this, and know that this is just one of what will be a continuing series of experiences where I have to loosen the metaphorical apron strings.

Since I am male I'm assuming my metaphorical apron is a novelty one with "Hail to the chef!" written on it.

I remember when Anne first suggested I take ThingOne to this class. I was reluctant at first, but figured I'd get 30 minutes off and could listen to podcasts or read the paper while ThingOne danced. I found it strange when I found I had to be there in the class. I've got used to it now and found I really enjoyed it. Now I'm going to have to learn to enjoy what I initially expected it to be like. I checked with another parent working on a laptop to see if there's a wireless signal at the school, but alas no. There goes that idea of a way to pass the 30 minutes. I'm thinking I'll buy the paper on the way there next week.

Which won't be half as much fun.

Of course ThingOne thoroughly enjoyed the new "big girls class". She could have at least pretended she'd missed having me in the room with her.
Posted by Stephen at 7:52 pm 1 comment:

We went to Centre Parcs last weekend, as we have each year since ThingOne was born. We went with my mum, sister, her husband and her in-laws. We'd only been back from Spain a week, so the timing wasn't the best from the point of view of spreading out our valuable holidays, but it worked out well for getting ThingOne back in the swimming pool quickly.

She was much more confident this time. It probably helped that it was a warm indoor pool. She even went down water slides with me twice. I tried my best to hold her up as I splashed into the pool at the end, but I'm pretty sure she went under each time. Whilst she wasn't keen on that bit there were no tears (and the fact she went twice means it can't have put her off that much).

We also hired a bike with a kiddy trailer, since Anne is thinking of getting one as transport around town (they're common around Cambridge). Apart from a bit of whinging from ThingOne that ThingTwo was touching her (ThingOne's) face, or trying to pull her hair, it was pretty successful. ThingTwo was a bit wobbly in it, so I don't think we're ready to get one just yet, but it's worth thinking about. 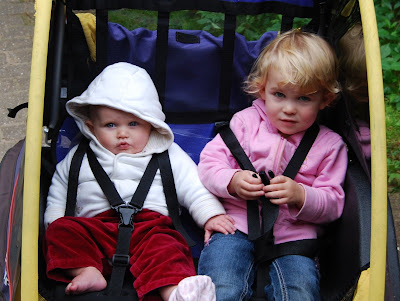 The weather was fab, and ThingOne got a lot more out of it than in previous years when she would spend 20 minutes in the pool and that was it. In previous years it was more about Anne and me relaxing with family, but ThingOne was much more keen to do things this year, so it was less relaxing and more exhausting.

Posted by Stephen at 2:32 pm No comments:

One thing we were keen to do on holiday was to give ThingOne plenty of chance to get confident in the swimming pool. She's not been swimming much since she went to classes as a baby, but when she has been she's enjoyed it, but has been very nervous about getting her face wet.

We made some progress while we were away, and Anne got her jumping into the pool and into Anne's arms. A couple of times whilst waddling around in the baby pool ThingOne did stumble and go under, or just get her face wet, and that was a disaster for ThingOne. She took a fair bit of calming down. However we managed to get her back in after each tumble, and told her to close her eyes if her face got wet and wipe the water away afterwards. This didn't have much effect on holiday, but clearly some of it went in since after we got home she enjoyed splashing in the bath and wiping her face. We knew we'd need to get her to a pool soon so as not to lose the progress she'd made. She's getting there gradually and I don't think we need to push her much, just get her in the pool regularly so she gets used to it.

The thing ThingOne enjoyed most at the pool was indulging her penchant for nudism. We would arrive at the pool most days with ThingOne in a sun suit, to try to stop her from burning up. She'd generally be wearing a hat too. There wasn't much skin for the sun to hit. After she'd been in the pool once she'd come out, stip her sun suit off (becasue it was wet) and would then spend the rest of the time at the pool running around "nudie" (usually shouting that too). One extreme to the other. We just couldn't convince her to keep the wet sun suit on. We had just as little success with normal swimming costumes. The nude fool!

Anne and I indulged ourselves a little while we were away by hiring a massive car. We could have all fitted in the boot quite comfortably. We thought we'd hire one for fun, since it was only a little more for a week and we have no intention of buying one at home. I wondered if we would become converts, since there are clearly luggage advantages, but it just felt too high and too big. It was fun for a while, but I have no problems with my dull old Fiesta. 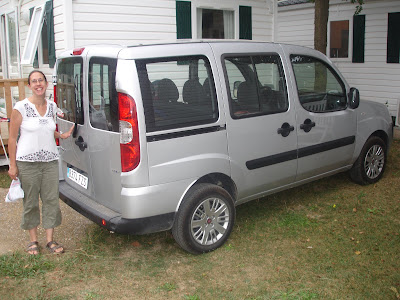 Posted by Stephen at 2:08 pm No comments:


We've been away for a week in Spain, near Girona, with Eurocamp. We were staying in a static caravan type thing, which was exactly the same layout as the one we stayed in last year in France. It was a little odd walking into it. We'd paid extra for air-con and a deck this year, and the extras were worth it. Yes, it's all a little unadventurous, but it's enough of an adventure taking a 6 month old and 2.5 year old on a plane so stop having a go, OK?

Last year, ThingOne was 20 months old when we went to France, and she got so much out of the holiday and came on a lot. By the end of the holiday she knew her colours, was better at climbing steps, could count to ten, and had many more words. Things are different with a 32 month old. I was wondering what had made the biggest impression on her this year and realised what it was when I heard her tell her mum:

Welcome to toddlerdom. Seeing some dog poo seems to have affected her profoundly, and now whenever she sees a dog in real life or a book, she proclaims whether or not the dog is pooing, has ever pooed, or will be pooing soon. It's very very rewarding as a parent to have opened her eyes to dog poo.

ThingOne had a great time. She has been overusing one particular word though, and it's been driving me mad.

As an illustration of this, here's a transcript of a conversation I had with her one afternoon as we hunted a for Geocache ('Treasure') near the campsite with the aid of a GPS receiver:

Lesson: Don't get embroiled. Escape with your sanity while you can.

ThingTwo had a great time on holiday too, largely because she's now able to move herself around (by dragging, with occasional crawling) and got to try to eat our shoes, our toes, sand, door mats, books and anything else you could care to leave lying around.

Being away has been really good for Anne's and my relationships with the girls. I got to spend more time with ThingTwo (I'm usually on toddler duty). She's really got a personality now and has a really sunny disposition. Having a newborn was odd after being used to a two year old, since the newborn inevitably seems a bit boring. At six months though ThingTwo's really starting to be more fun. Anne got to have a lot of fun time with ThingOne rather than having to be the one doling out discipline and setting boundaries. At home it tends to be weekend-Dad who tends to get to do most of the fun stuff, and gets to say 'Yes' more than her mum does during the week.

Poor ThingOne is starting to understand that ThingTwo being on the move could be bad for ThingOne's dominance of the house. Seeing ThingOne chased around the room by a 6 month old who's after her toys is very comical. Poor ThingOne has some shocks to come.
Posted by Stephen at 10:29 pm 2 comments:

ThingTwo's having a great time trying new foods. I think she partly just likes the attention, having had ThingOne monopolising dinner times up until now.

Today's meals were brought to ThingTwo by th letter B. Broccoli... 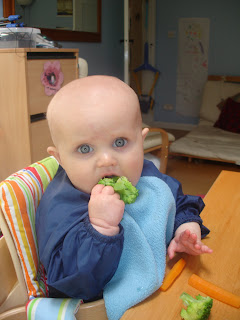 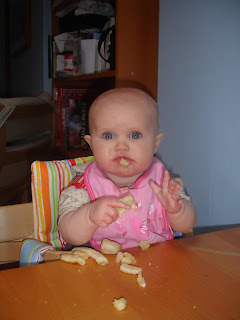 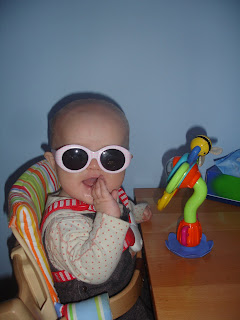 Here's a little vid of her trying broccoli - a big hit. Following that is ThingOne making her laugh. Every time ThingOne gets a bit too noisy or boisterous we try to ask her to quieten down, and ThingTwo undermines our authority by laughing at ThingOne. Now I just use ThingOne to make ThingTwo laugh.

Posted by Stephen at 8:31 pm No comments: