Here we are again - another one turns two. Two years ago since ThingTwo was born in our front room, followed by an earthquake. And, other than a bit of teething, ThingTwo seems to be enjoying herself at the moment.

ThingOne was ill for a few days following her fourth birthday in January, and with a quieter elder sister for a change ThingTwo took the opportunity to step up. Almost overnight her language came on a lot. Having shown no interest in joining words she suddenly figured it out. A month later and we can barely shut her up. It's a lot of fun. 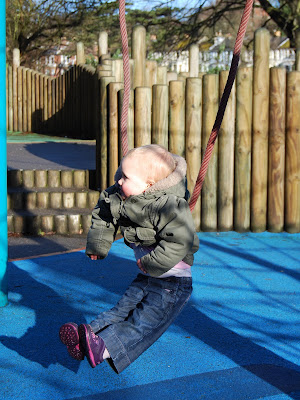 I can't wait for the next year as she communicates more. She and ThingOne get on really well (long may that last). The occasional disagreement, sure, but that's only to be expected. It's so much fun having ThingTwo at the breakfast table, as she barks instructions at us, makes us each take a drink our drinks in turn, laughs at her own private jokes, and sings to herself.

I've put together a video of bits of her second year, ending in one such sing song from Wednesday morning this week.

Here's a link if the video doesn't display.

Posted by Stephen at 6:00 am No comments: