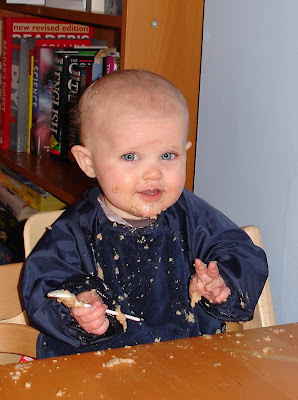 ThingTwo turned nine months today. It's fascinating to see how far she's come on, and to see how her development and personality differs from ThingOne's. We looked back to an entry we posted when ThingOne was the same age and saw that ThingOne was managing to clap in the appropriate time in 'If you're happy and you know it clap you're hands'. ThingTwo can't even clap. She gives it a go, but really just waves her hands about. She clearly really wants to clap. Poor thing.

She's a cheery soul though, with a delightful big-mouthed smile. More consistently cheery than ThingOne was. And she sleeps better at the moment. She started off sleeping less consistently, mind. It may be that she's learned to sleep better because we've left her for longer when she wakes up at night, but who knows?

She's had fewer illnesses than ThingOne too, though did have a more dramatic illness than ThingOne had in her first year when she caught chikenpox (from her sister) in June. Currently she has a fairly bad cough, which is pretty dramatic and horrible to hear at night.

ThingTwo is certainly naughtier. ThingOne seemed to be content with what she was allowed to do, but ThingTwo insists on making a beeline for the fireplace. ThingOne tried this of course, but soon got the message that it was out of bounds (or maybe was just easier to distract). We'd hoped to avoid a stairgate downstairs this time round, but ThingTwo's latest mission is to climb the stairs whenever we turn our backs. This morning I remarked to Anne that ThingTwo turned nine months today, and as I said this we realised she wasn't in the back room with us. We ran to the stairs where we found her four steps up, beaming a big smile at us.

She's a better eater than her big sister was, sometimes even out-eating her big sister at mealtimes now. ThingOne would eat well one meal, and then eat very little the next. Sometimes she'd eat nothing for days on end, and then make up for it later. ThingTwo enjoys mealtimes a lot, and if she doesn't eat we know something's wrong.

The signs are starting to show that these girls could be very different, and it'll be interesting to see who ThingTwo is as she turns into a little girl.
Posted by Stephen at 8:00 pm