I said On Wednesday that Tuesday night's interrupted sleep was unusal. After Wednesday and Thursday nights it was becoming less unusual. Grah! We think maybe ThingOne wasn't enjoying being somewhere new. Or she may have been cold (despite the nice weather the cottage was cold). She was exhausting us during the day as she wants to run around everywhere, and then keeping us up during the night. Just not on!

We'd planned to drive up the coast, perhaps to Cromer, on Thursday. As it was we were shattered (Anne and I were - I don't think ThingOne was) so we stayted more local and took ThingOne to another farm. This time it was Junior Farm in Wroxham. It was good fun. Anne got to feed milk to a lamb, and we had a great time watching ThingOne interact with the animals.

Now ThingOne's walking she's having more dramatic accidents than before. She fell over on the concrete in Yarmouth on Wednesday and grazed her head, and then at the farm she fell over on gravel onto her head. Oh dear. She was under my watch so I felt bad, but she didn't cry for long. "Look Anne - there's dirt on her nose", I said. Anne went ballistic: "THERE'S BLOOD ALL OVER HER FOREHEAD!". I'd missed that. Oops.

Here's a photo of her with her new scab. 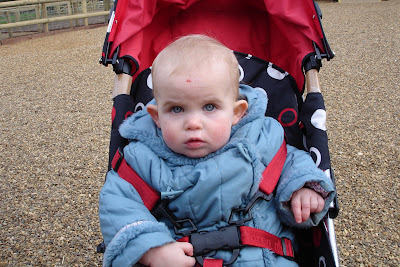 The pygmy goats were particularly funny-looking, and ThingOne seemed to enjoy stroking them. One of them ate her Junior Farm sticker, which was a shame.

We returned home on Friday, tired. A good first holiday together (let's hope she sleeps more next time).
Posted by Stephen at 7:28 pm No comments:

Wednesday, following an unusually interrupted night’s sleep, Great Yarmouth, only about 8 miles from where we're staying. We bought tickets for the Sea Life Centre (taking out a second mortgage to cover it) and showed ThingOne sharks, turtles, fish etc. She was pretty keen on some of it, but again was much more interested in running around (away from us), saying “bye bye” to everyone. We went twice round the centre (we were the only visitors there) before taking ThingOne out for a nap. Anne went to get a coffee and read the paper while I pushed ThingOne in her buggy up and down the prom. She slept for 40 minutes (she generally needs more than this, but gets too excited when we’re out) and then I went to meet Anne.

For lunch we had fish and chips at Harry Ramsden’s. Because that’s what you have at the seaside. ThingOne’s a big potato-fan (as opposed to a big-potato fan), so ate a fair few chips, and impressed us by eating a fair amount of fish too. Plus she ate one pea. Probably by mistake. Mainly though, ThingOne ate bread. She LOVES bread. Any kind of bread. After she finished our bread she pointed at the bread of the people at the next table and shouted “Ba!” We think that means “Bread. Give me bread!” 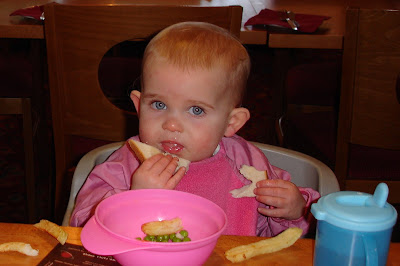 After some more time on the beach, where ThingOne again tried to run into the sea and had great fun pushing her pushchair down the pier, it was another circuit of the Sea Life Centre (making sure we got our money’s worth). Then it was “soft play” time in their cafeteria. This comprised a ball-pit, some cushions and slide I couldn’t figure out how to get into – I think I was too big. Shame as ThingOne likes going down slides. 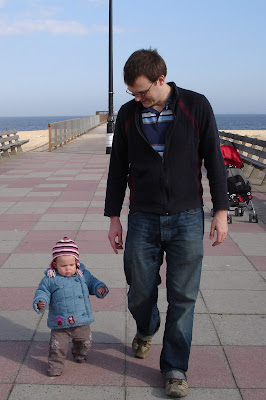 After this we made our way back to the car to go back to the cottage, but we’d barely set off when ThingOne flaked out. We walked her up and down the prom a bit as she needed the rest.

She’s having a tiring week. As are Anne and I – we’re shattered. 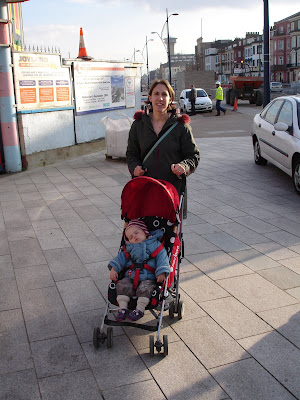 Posted by Stephen at 7:23 pm No comments:

(Oh) She does like to be beside the seaside...

On Tuesday we were up early (ThingOne’s choice, not ours) and took a walk to the local beach. It was the first time ThingOne had seen the sea, and once she’d got over the novelty of walking on sand we took her to the water’s edge. She LOVED it! We could barely hold her back – she was desperate to run into the sea. It was cold, so we weren’t going to let her do that, but we let her run to the edge and then lifted her back as the waves reached her. She squealed with delight each time. Great fun. 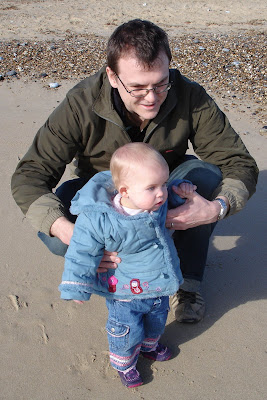 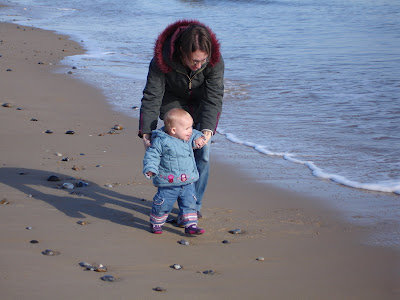 In the afternoon it was zoo time – more animals for ThingOne following Sunday’s farm trip. We went to the nearby Thrigby Wildlife Park to see Asian animals (yes, quite specifically only Asian animals). It was over £8 each for me and Anne, so we weren’t impressed to find the café closed for refurbishments (we’d planned to have lunch there before seeing the animals). Honestly – no wonder people don’t holiday much in Britain! They didn’t charge us an out-of-season rate did they? No.

We sucked it up, bought some (grotty) sandwiches from the gift shop (we had ThingOne’s lunch with us) and then went to see the animals. ThingOne was excited to see the leopards, but I don’t think she was particularly impressed by any of the other animals. We could barely get her to look at the monkeys, which held our attention for quite a while. ThingOne was more interested in running about on the grass, up and down hills, climbing steps and falling over. I think she got our money's worth (even at £8 each for me and Anne).

Later she did spend a while looking at the tigers and some birds. She was probably just tired out by that point and needed a rest.
Posted by Stephen at 7:01 pm No comments:

Today the three of have come away to Norfolk for five days. We’ve rented a cottage in Winterton, just north of Great Yarmouth. It’s out of season so things are quiet, but the weather started glorious and looks set to continue. (Not particularly hot, but sunny and bright.)

With lack of sleep and interrupted nights we didn’t feel up to a holiday in ThingOne’s first year (so had a week’s holiday at home) but we’re feeling brave enough now.

The cottage is a bit basic. It’s to the shame of British Tourism that it’s still possible to rent places without a shower! We didn’t think to ask, thinking EVERYWHERE would have a shower (for crying out loud). Still, we’re on holiday so will make the most of it. With the exception of the shower I think we're to blame anyway. We've gone for a cottage in the same price range we usually go for, neglecting to remember that we now need a cottage with TWO BEDROOMS, and if we pay the same as we did for a one bed cottage we'll get fewer comforts. Must remember there are now three of us...

We dropped in on my mum’s cousin in Swaffham on the way here, and ThingOne had a good time showing off her new walking skills. She also ate some sausages, which she’s never had before. ThingOne has a habit of eating foods that she’s previously always refused when other people are present, just to show Anne up when ThingOne is offered food and Anne says, “No, she won’t eat that”. 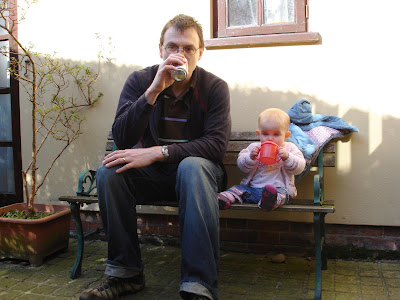 Posted by Stephen at 9:30 pm No comments:

Fun on the farm

I’ve been to Washington DC (well, Arlington, VA) twice in the last month with work – both times at short notice. This has meant leaving Anne quite literally holding the baby (ThingOne). And I’ve missed the monkey. And I’ve missed ThingOne too (you see – I was calling Anne a monkey).

Each time I’ve left for the US ThingOne has been ill, and wanted to sleep on one of us all day. When she's like this she seems very much like a small baby again. It’s been sad to leave, but while I’ve been away Anne has been sending me photos of a seemingly different girl – now confidently walking around and interested in everything.

It was great to come home last week to a well baby and as the weather was nice on Sunday we took her, along with some friends and their baby of a similar age, to Wimpole Hall Farm not far from Cambridge.

ThingOne’s been interested in animals recently, but mainly sees dogs, cats and garden birds, so it was good to show her some pigs, cows, goats and chickens. Mainly though she enjoyed the playground and especially being pushed around on a toy tractor. 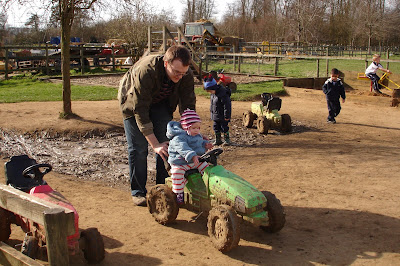 Somehow we’ve created a fearless girl. She was trying to touch the snouts of HUGE pigs through the bars and didn’t seem fearful of any of the animals. Mainly, ThingOne wanted to walk as far as she could away from her mum and dad. I don’t know how far she’d have gone if we’d let her just walk and walk, but we let her go pretty so far and she didn’t show any signs of stopping. 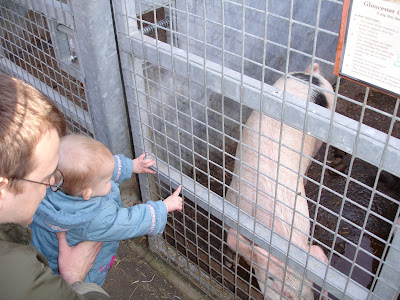 ThingOne had a pretty poor night’s sleep after her trip to the farm. I think we may have over-stimulated her, poor lamb.
Posted by Stephen at 5:19 pm No comments: