After ThingOne and ThingTwo had had their bath tonight, Anne got ThingTwo ready for bed while I dried ThingOne and began to get her ready.

We are attempting to teach ThingOne basic philosophy via pop songs. (She also knows that every step she takes I'll be watching her.) She now has Jagger's advice down pat, and yet tonight she wanted to delve deeper. Surely as a man in his thirties I could hold my own against a two year old. Surely.

A simple but, I felt, philosophically powerful idea, and not above a two year old. I continued...

I felt we were going into specifics too much, but I was hoping she was taking the overall point even so.

L: "I have yogurt for pudding. Why you have yoghurt for breakfast on Tuesday?"

She had me there. She'd deliberately led me down this path, like a sneaky barrister.

S: "Well, I had a train to catch so didn't have time to make breakfast. And anyway, yoghurt is special because it can be either pudding OR breakfast. Or a snack."

I was floundering. Already I'd had to excuse yoghurt as a special case. I hadn't thought this through.

By this time she had her monkey pyjamas on. Thus I win. 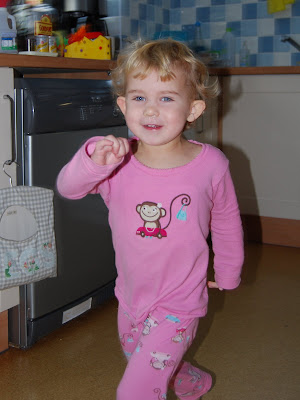 I think you resolutely lost that one, Stephen.

It reminds me of another Rolling Stones hit you should teach Lily -'Under my thumb..'

Do you think so Kerry?

I thought I'd satisfied my aims when I managed to get her into her pyjamas.

Meaning I can get satisfaction.

That is, to employ a double negative, I can't get no satisfaction.

I give it 3 more weeks and before she defeats you on a regular basis.

Wow, that's some seriously ruthless logic she's got there. Do let us know when she drives you to your 19th nervous breakdown.

I think next time you should reinforce the subsequent nugget of Jagger-philosophy - "if you try sometimes, you just might find you get what you need". Where what you need is anything but yoghurt...