Before I start droning on about ThingOne's arts 'n' crafts, ThingTwo now has a "Tripp Trapp" high chair, like her big sister. This means she can now sit up at the table with us at meal times. She's not sitting unaided yet, but can do well in this high chair and seems to enjoy being with us during breakfast and lunch. ThingOne isn't sure about not being the centre of attention, but she'll come round.

ThingTwo's not being weaned yet, but we'll start her on solids some time within the next few weeks. She slept through 7pm to 7am for the first time last night, so is coming on well (joy!)

(Just in time for teething to mess everything up!) 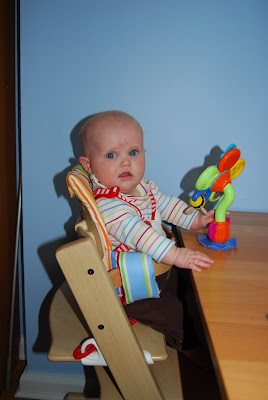 I recently got ThingOne a Thomas and Friends poster for the Wendy House. ThingOne likes the TV show and books, as it gives her more names to learn, and she can work out (or decide arbitrarily) which engines are boys and which are girls. She liked the poster and she and I were in the Wendy House listing all the characters on it.

At this point, Anne arrived. Anne's had to sit through the TV show more than I have and so knows many of the characters.

We checked in one of ThingOne's books and sure enough, the poster was wrong. I got out a big black marker and changed the name (more for my benefit than ThingOne's). I don't know how she keeps all these characters names in her head. She certainly has her mother's freakish memory. 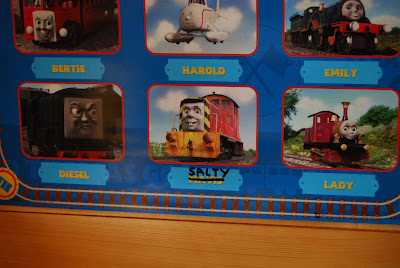 Here's ThingOne checking the rest of the characters against her book: 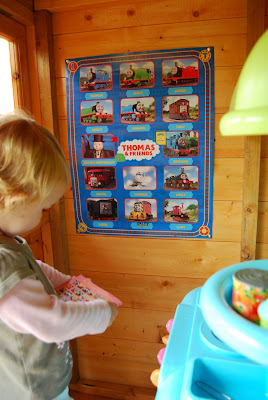 We had more character-driven fun on Sunday, where ThingOne and I drew lots of Mr Men. Notice ThingOne's skilful colouring of Messers Strong and Tickle (I know - rubbish isn't it!) ThingOne kept insisting I draw two of each character so one could be a Mr and one a Little Miss. 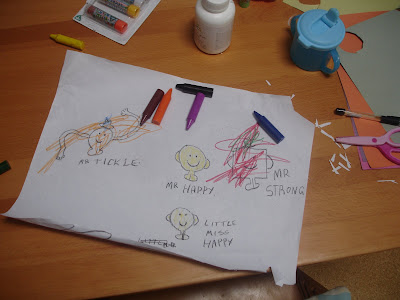 Later, ThingOne decided to destroy all we'd drawn on another sheet by "colouring" everything black. "Are you a Goth ThingOne?" I asked.

*She didn't actually say this. 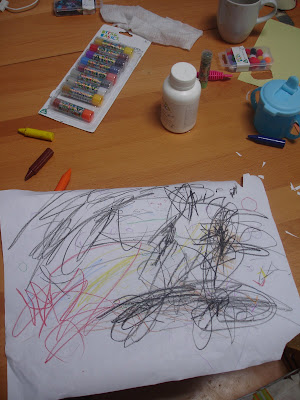 Anne's been feeling ThingOne's not eating a great variety of foods at the moment. I think she's doing well, and that we as kids, and especially our parent's generation, would have had nothing like the variety she has. However, Anne's thinking ThingOne's too reliant on wheat and isn't eating enough different veggies.

ThingOne's recently been quite reluctant to try new foods, but did well last week when Anne made a special effort. Anne suggested a new craft project to help with this push, and ThingOne has responded very well to it. We made (and mounted on cardboard - get us!) a plate for ThingOne and now when she tries something new we make or draw it and stick it to her wall-mounted plate. Anne and I aren't very crafty, so we're particularly pleased with this ingenious blend of art and encouragement.

Until ThingOne decides to rip it from the wall and use it as a Frisbee.

(I didn't know Frisbee was a brand name until Blogger told me it needed the F capitalising.)

Click on the photo to see the large version, in which you can see in exquisite detail the foods The ThingOneter has tried recently. 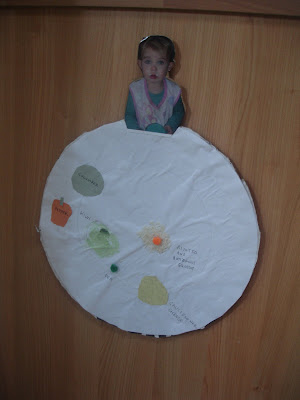 I'll finish this entry with an astounding structure ThingOne made (with help, I suspect) at nursery this week. I'd imagine the world of modern art would have something clever to say about this yada, yada, yada... 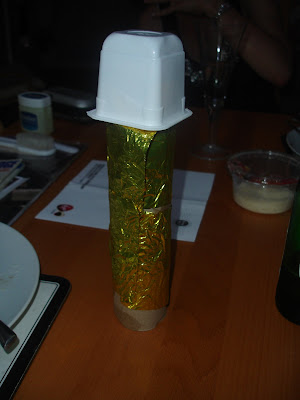