We were in St Leonard’s on Sea last weekend visiting friends, Ian and Sarah. ThingTwo sat up on her own for the first time before we left on the Friday morning, which was quite exciting. And ThingOne had a “Babyccino” in Costa Coffee in Bluewater where we stopped off on the way down. This made her feel very grown up. I told her it was a ThingOneccino, since I didn’t think she’d appreciate the baby part of the name.

Our friends have a one year old girl, so they were interested in seeing what ThingOne was up to, and we were keen to see how ThingOne would cope with a having baby crawling round the house and interfering with things. ThingOne was a mixture of delightful and grumpy, and the latter became quite hard to cope with. She’s so over tired all the time. We wonder if she’s having a growth spurt. It can be like having a miserable teenager in the house, but one who doesn’t go to their room for hours on end. Anne and I end up feeling guilty for getting frustrated with her, because she’s not really that badly behaved, mainly just tired and grumpy. But when she’s like that she seems to want to fight us on everything.

As I say though, she was very nice for much of the weekend, and still insists on calling our friend Ian “Moose Man” due to a misunderstanding a year or so ago when I was showing her a picture of a moose in a photo in which Ian happened to be also. It’s not a nickname we’ve discouraged particularly, so I hope Ian (Moose Man) doesn’t mind.

As well as being keen on Mr Men at the moment (Ian and Sarah had all the books which meant I had to read most of them that weekend), ThingOne very much likes Charlie and Lola (on TV and in books). It may be that the character of Lola is uncanny at capturing the essence of girls aged 2-5, or it may be that girls of that age pick up a lot from the TV show when exposed to it, but ThingOne is coming out with a lot of “Lolaisms”. This can be quite useful, for example when we tell her we have to comb her hair so she can be “Princess No Knots”. It can also be quite odd, as when we were driving from Ian and Sarah’s house to Bexhill to give ThingOne a chance to paddle in the sea.

Me: We’ve got a surprise for you ThingOne. Ian and Sarah live somewhere very special.
ThingOne: Where? Please you tell me.
Me: Well, we’re going to somewhere fish live.
ThingOne: Where?
Me: Where do fish live ThingOne?
ThingOne: The ocean?
Me: That’s right. So where do you think we’re going?
ThingOne (suddenly very, very excited): I know - OCEANLAND!
Me: Erm, yes. That’ll do. 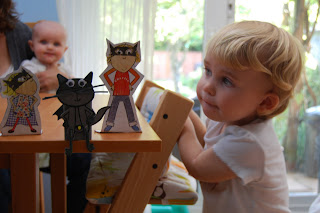