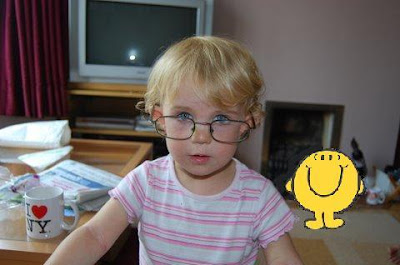 We have to read them to her a lot, but I'm not sure it's really the stories she like so much as the other attributes:
- some are men and some are women (a current fixation of ThingOne's is what is a boy and what is a girl)
- there are many names to learn (she loves to learn lists)
- she can work out which letters the various names begin with
- there are numbers next to the pictures of the characters on the back of the books

Sometimes ThingOne wakes up talking about the Mr Men and Little Misses, and doesn't stop talking about them for ages. Sometime she gets over excited and just shouts out the names of characters seemingly at random like a child with Hargreaves-Tourettes

The other day I was telling ThingOne not to do something or other, when she looked at me and said "Mr Grumpy!", in a way that sounded like she was saying "Oooh, aren't YOU Grumpy today Daddy!" I don't think the patronising slight was intentional, but her timing was impeccable and it was hard not to laugh.

On Sunday we were in a playground in our local park and ThingOne was hot and a bit of a Little Miss Grumpy herself. We didn't have her swimming gear with us, but I suggested she go into the paddling pool in her pants and she cheered up a lot in the cool water. She quickly took her pants off, not wanting to get them wet and ran around gleefully in the nude in the busy pool for ages. After a fair while splashing around with her (me fully clothed) I went to sit with Anne and ThingTwo and left ThingOne to it. Watching ThingOne run and splash among everyone, stark naked, laughing, squealing and randomly barking the names of Mr Men was pretty funny.

I said to Anne that if we gave ThingOne a can of Tenants Super to hold as she ran about in the pool it might make it even more enjoyable to watch.
Posted by Stephen at 7:44 am