She'd got a bit better recently, but in the last few days she's really making me feel bad for going to work by getting really upset when I leave, saying she wants to go to work with me, and sitting on the stairs crying when I leave. It's a horrible way to leave the house as I feel sad, Anne has to cope with a sad ThingOne when she's trying to sort ThingTwo out.

Apparently she's pretty much fine once I've gone, but it's sad to see as I drive off.

I'm going to New York for a friend's wedding in June, and since ThingOne is bad when I leave for work I've told her about my trip in order to get her used to the idea. ThingOne is very keen on the Statue of Liberty, so I've sold her the idea by telling her that I'll bring her back a picture of it. This has backfired in a way as I've clearly done all this far too early. Every morning when I get her from her room (and about three times a day after that) she asks me if I'm going to New York today. "Not today, ThingOne, next month". "Tomorrow?". "No not tomorrow. It won't be for a while ThingOne". It's hard to get such concepts across to her and I just make a mess of it when trying.

Here's ThingOne being taught how to use a mouse by her Auntie Lindsay. ThingOne is very attentively playing Pick a Pair on the Thomas the Tank Engine web site. 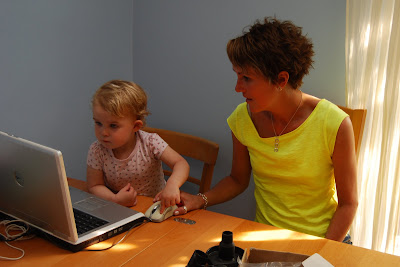