A long one this.

Since ThingOne's second birthday, back in January, I've been taking her to Melody Bears every Saturday morning. This is a dance class for toddlers. Dancing for toddlers isn't the most coordinated thing, but it's aiming to get them used to the idea of moving to music, moving in time with others, doing set routines and making up their own movements. And running around and jumping. ThingOne has loved dancing since she's been able to control her movements. (Her initial flailings before she was sitting up could only be described as similar to dancing by people who'd seen me throwing moves on the dance floor in my youth).

Her love of dancing may have come from Anne and me "bouncing her through" to her next feed when she was a baby. When we were trying to get her to go longer between feeds and she was grumpy (as opposed to being screaming with hunger, which we had to learn to recognise) we'd put some music on the iPod and dance her around our back room. Consequently "iPod" was one of her early words. Generally the music would be They Might Be Giants (quite bouncy) but we gradually built up playlists of things we thought she liked (i.e. things we liked that were good to bounce to). This soon became less a method of cheering her up when grumpy and more just something she enjoyed. Visitors would be railroaded (by her) into jumping up and down on her foam numbers with her to "One Week" by The Barenaked Ladies.

And so to Melody Bears (a kind of gateway drug for ballet I suppose). This takes place in a primary school gym/hall each Saturday. 10-15 toddlers each bring a teddy or doll, and the teacher and her helpers talk the kids through various moves, with stories, visualisation etc.

ThingOne initially wouldn't let me sit down at the side of the room with the other parents. I had to be with her and "dance" along, encouraging her. I was fairly conspicous being the only dad up there (a few mums also had to stay with their kids). Over the next few weeks, ThingOne gradually let me sit down more and more, until eventually she was happy to be up there on her own, turning to me every now and then to wave or give me a thumbs up.

At the end of each class the kids all pretend to put their teddies to sleep (using the rocking method, rather than lethal injection). The children then lie down with their teddies and pretend to go to sleep themselves. ThingOne HATED this. This was at a time when she associated sleep with being told it was too early to wake up in the morning (the end of the world, apparently) and for the first few weeks she'd just cry whenever she was asked to get ted to go to sleep. After a few weeks she progressed to mere misery at this part of the class.

ThingOne didn't dislike the dance class though. She enjoyed it quite a lot. And over time she came to like the dance class more and more. She'd look forward to it each Saturday and would talk about it a lot. (Partly because she and I would go to Sainsburys after to pick up a few groceries and then go for a drink in the café - a highlight of ThingOne's week).

BUT SHE WOULDN'T DO ANY DANCING.

ThingOne would just stand there watching or scowling whenever the others danced. She was well behaved, and attentive, but when it came to putting her hands up in the air to do 'tall like a tree' or crouching down to do 'small like a mouse' (the warm up exercises at the start of the class) she would simply stand and scowl. She'd walk around the room with the others when asked, but not do any actions ("Mummy bear picks up her handbag, come on children…"), nor would she skip or wave as required.

And yet, if I tried to get her do do any of the dance moves at home to show her mum not only would she do them perfectly (well, recognisably at least) she would correct me if I got them slightly wrong or did them in the wrong order.

It was maddening. I started to wonder if it was worthwhile. She seemed to enjoy it and was obviously taking it in so I kept taking her, but I just wanted to see her join in a little. To be fair to her she was one of the younger kids in the class, and probably the smallest, but I was determined to make her perform. Maybe I should have shot bullets near her feet like in Westerns? "DANCE GIRL!" (I'd have used rubber bullets, obviously.)

I tried all sorts of encouragement, but resorted eventually to bribery. "ThingOne, if you do 'tall like a tree, small like a mouse and wide like an elephant' this week at Melody Bears you can have a straw with your water in Sainburys café". I had made clear what was at stake. ThingOne understood this, and was very keen to have a straw with her water (she is a child of simple pleasures).

Saturday came, and I reiterated our deal. ThingOne stood and scowled throughout the class. At the end she told me she hadn't done tall like a tree and so couldn't have a straw. For several weeks we went to Sainsburys after Melody Bears and had no straw. I wondered if I was doing the right thing. I felt like I was punishing her (though she'd never had a straw with me on a Saturday, so I wasn’t taking anything away).

The last dance class before Easter was particularly notable for her intense scowls. At the end when the children rocked their teddies to sleep, ThingOne stood with her teddy by her side and scowled. When everyone lay down on the floor, ThingOne stood over them, as though she were the last one standing following a glorious battle, as though in some toddlers vs soft toys version of the movie 300. It was an amusing sight, and I wished I'd had a camera with me.

Easter came, and Melody Bear "went on holiday for a few weeks" (though ThingOne insisted MB had merely lost her shoes). ThingOne danced around the house to her iPod playlists and to the music in her head as usual. The break was three weeks long, an eternity in Toddler Time, and I was concerned it had been too long and that it would now take even more work to get her to join in.

The first Saturday back, I had her doing her dance moves for me in our hall before we left the house. She did them all gladly. I chanced my arm and tried to get her to rock her teddy to sleep. No go. She got a bit annoyed at me. Fair enough - can't expect miracles. We went to the school and I sat down for another Scowl Fest.

Only for ThingOne to join in throughout the warm up session. She did tall like a tree, wide like an elephant, small like a mouse, and she did them like a pro. I was the proudest parent in the room, and felt my eyes welling up. She was going to have the best straw Sainsbury's had to offer after this. I was going to look for a golden straw. With diamonds in it. I was so happy.

ThingOne then proceeded to do every dance move asked of her, including some that they'd never done before and were only introduced in that class. I couldn't believe it. Every now and then she'd look over and grin at me. I'd give her the thumbs up and she'd reciprocate. I was doing very well not to cry tears of pride. Let's just say it was getting a bit dusty in there.

It came to putting her bear to sleep at the end. I was expecting nothing from this, and my mood couldn't have been dampened by the scowling that would follow. I wanted to go to her and tell her she didn't have to do this bit and that she'd done plenty. However she rocked her teddy along with everyone else, and lay down on the floor pretending to sleep. It was becoming harder and harder not to shed a tear, but I managed it in order to save my macho image. (My macho image that had apparently survived me dancing with toddlers in front of the rest of the parents for the first few weeks of the January term.)

Once the kids had all 'woken up' and stood up again, ThingOne shouted across the room "Daddy very proud, ThingOne have a straw" and ran to me, beaming. It was too much and tears fell down my face.

(Only a few, I'm not a wuss. My contact lenses were probably partly to blame, and anyway I may have had an eye infection.)

I was so proud of her. I don't know how her brain works, but something had clearly clicked in there. Around the same time she started singing along with songs (she'd sung a lot before, but I don't think she'd sung while a song was playing or while someone was singing to her), which may be connected. Whatever had happened, she now dances along to everything at Melody Bears without a problem. Parenting takes patience I guess. 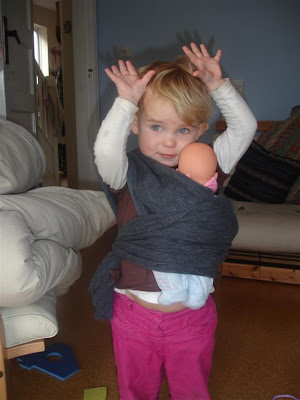