I was at work on Thursday, and spoke to Anne on the phone. "ThingOne's OK", Anne said reassuringly. I instantly felt a bit sick. When Anne tells me that on the phone in that manner I know there's a story coming about some near disaster that has happened involving our FearlessFirstborn.

ThingOne likes to open the drawers in our bedroom, and then close them again. Simple pleasures. That morning Anne heard a loud noise from our room, followed by ThingOne crying. She ran to our room to see the chest had toppled over onto its front. ThingOne had opened all the drawers (except the top one which she can't reach) and the whole thing had become unbalanced.

It's a very heavy chest of drawers, so it's very luck it didn't land on her.

Also, we have a sheet of glass on top of it to protect the wood, and that had of course slid off the top. Fortunately that had become lodged above the ground between the mirror and the bed and so hadn't hit ThingOne either.

I wasn't there but in my imagination ThingOne was sat in the middle of the carnage untouched, in a similar manner to a house falling on Buster Keaton who happens to be standing where the opened window falls.

Anne checked if ThingOne was hurt.

"Does it hurt ThingOne?"
(Crying) "Yes"
"Where does it hurt?"
"Over there" (pointing at the fallen chest)

I think that means she was OK.

ThingOne was very shaken, and now knows only to open one draw at a time. We will however be getting some furniture straps to attach the furniture to the walls, as a less lucky repeat doesn't bear thinking about. I felt cold after hearing this story, and Anne says she took a while to stop shaking.

This morning, ThingOne was in a slightly fraught mood, and wanted to be carried a lot. Eventually we realised she had a limp when she walked. This doesn't appear to be related to the chest of drawers incident. The best I could get out of her was she had hit it on the wall while in bed. No idea how. It must have been hard to have got a limp. She was still limping when I got home from work, though was also jumping "like a monkey" so it can't be that bad.

Another couple of reminders of the permanent state of worry parents live in. 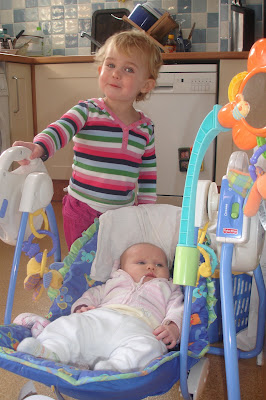