A couple of weekends ago we went to Centre Parcs with my mum, sister and brother-in-law. We did the same last year, and it was good to see how different ThingOne was a year on. 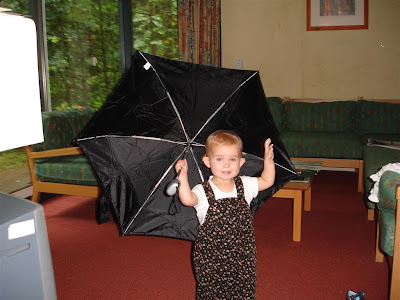 We had a great time, and while the weather wasn't up to much it didn't spoil our break. We fortunately had managed to schedule all the outdoor activities (golf, walks, cycle rides) during the dry periods, and did indoor things (nap, badminton, massages) when it was raining.

Anne and I hired bikes, mine with a child-seat. We weren't sure how ThingOne would take to it, especially the wearing of the cycle helmet. We needn't have worried - she loved it! After she saw a little girl wearing a helmet she was happy to wear one, and she seemed to enjoy being up high and surveying the woodland (especially the squirrels, ducks and rabbits). 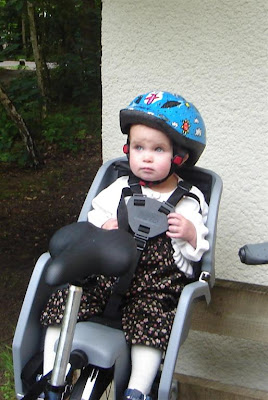 Last week I dug Anne's old bike out of the shed (actually my mum's old bike she gave to Anne that Anne has never used) and tightened up some nuts. I got it road-worthy and today we went to a cycle shop on Mill Road in Cambridge (there are plenty of cycle shops here, as you might imagine if you've been to Cambridge) and bought a child seat, a lock, a stand and a helmet each for Anne and ThingOne. It'll be a good way for them to get around, and there are plenty of cycle routes here for them to ride around safely. 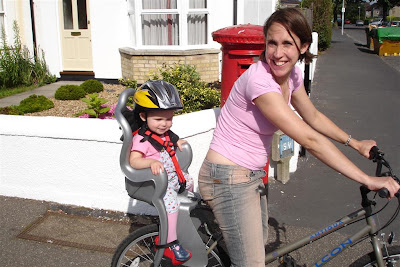 Anne was worried she wouldn't feel confident enough on the bike. As it was, she may have been a bit over-confident. She popped in to visit a friend and left ThingOne on the bike with the stand engaged as she rang the door bell. The bike fell over on the gravel, and ThingOne went down with it (being strapped in). She screamed a bit, and Anne felt awful (as did I when I caught them up - I'd been following with the pushchair). ThingOne soon calmed down though and just has a bruised arm. Poor thing. I guess that's lesson one learned.

Earlier in the day we'd made the most of the nice weather (the first in a while) and been to a Cambridge "event" on Parker's Piece. There were stalls, a French market and live music. Again, ThingOne liked the music and danced about making us laugh. SHe got a bit worried by people listening to the music who weren't wearing socks - OCD child! 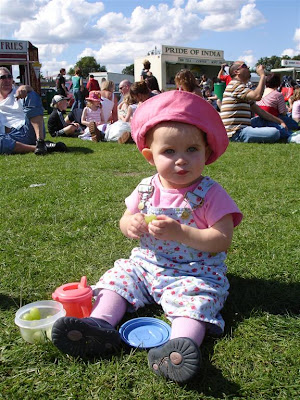