Scene from this morning:
ThingOne: "Tair noo noo clip clop."
Daddy: "Not yet ThingOne - you can have your breakfast when we've got you dressed."

Communicating with ThingOne is like communicating with Sooty's pal, Sweep. Sweep used to just make a squeaking noise and Matthew Corbett would say "What's that sweep? You want to go outside?" (You'd probably put Sweep's lack of vocal ability downto him being a dog-puppet, but then Sue the panda could talk properly, and I imagine Sooty could too, albeit in a whisper that the viewer couldn't hear.)

It's similar with ThingOne, as I say. She's got this language that Anne and I can (often) understand, in context, but anyone viewing us would think we're just making it up and pretending ThingOne's better than she is at speech.

Many of her words are the same. She previously said "bread" and "bird" ok (though generally leaving off the last letter - perhaps she's French?) But since she learned to say "baby" quite well every B word is now "bay-beeee". So bread is bay-beee, bird is bay-beee and bib is bay-beee. So you have to see what's happening in order to understand her in context. If she's at the window it probably means bird, if she's looking up at the kitchen cupboards it more likely means bread. It's easy to get the wrong meaning and takes experience.

It's the same to a lesser extent with C words. Since she learned that a horse goes clip clop the few C words she knew have morphed into that.

Deciphering The ThingOne Code is thus a mixture of experience, frequency-analysis, working out the context, and a little blind luck.

So to explain the title of this post, and my response:

Tair - Chair. Fairly straightforward that one. Especially when she's banging her high chair.

Noo noo - plate. ThingOne's plate has the Teletubbies on it, and Noo Noo (the Teletubbies' vacuum cleaner friend) is depicted around the rim.

Clip clop - crumpet. This is often what ThingOne has for breakfast and given that she's asking for her plate crumpet is the most probable meaning.

So "Tair noo noo clip clop" means that ThingOne would like to get into her high chair and be given her Teletubbies plate with a crumpet on it. Simple really.

Unless I'm wrong and she's actually telling me about her planned U-Boat attack on a convoy of supply ships crossing the Atlantic. 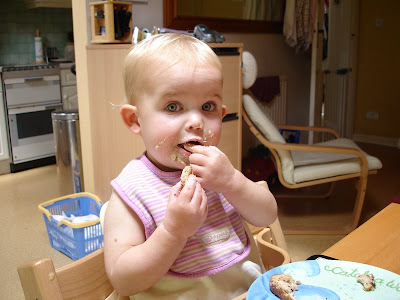