Sunday was my second Father's Day as a dad. 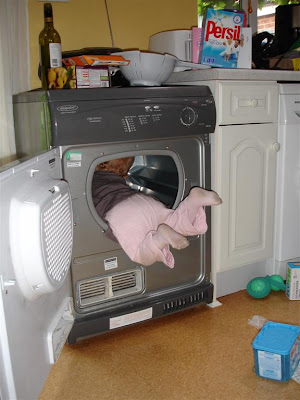 After a morning playing in the tumble drier (see photo above) we drove to Leicester to the Big Session, a folk music festival, to meet up with Anne's mum and sisters (and partners).

It had rained for the first two days of the festival and the ground was wet and muddy, but the weather was good on Sunday. ThingOne was in her element. Not only did she have aunts and grandparents to entertain her, there was live music. I don't think she's seen a band before, and she loved bouncing around in our arms (the tents and auditorium were too busy for her to run around much when music was on).

I was elsewhere at this point, but I was proud to hear from Anne that ThingOne went especially mad with her dancing when a band did a cover of the Talking Heads song "Road to Nowhere".

ThingOne even chose a hat at a stall which she insisted on wearing. We've not had much luck with getting her to wear hats, so that's a good sign. 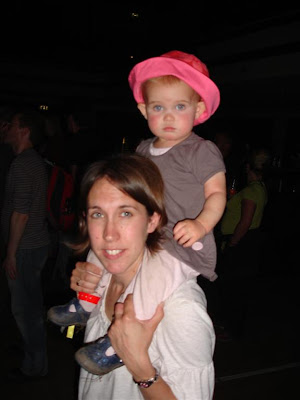 There's some video on my YouTube "channel" (link on the left hand side of the blog) of ThingOne at the festival. I don't think it captures just how much she enjoyed it, but I find it fun to watch her bounce about anyway.

On Monday (while I was away on a course in Staines) Anne was running ThingOne's bath and found ThingOne in our bedroom. ThingOne had turned our radio on, and was listening to I'm Sorry I haven't a Clue on Radio 4. Anne said it was the funniest thing ever to see ThingOne dancing enthusiastically to Tim Brooke-Taylor singing "Teenage Dirtbag" to the tune of The Ash Grove (a traditional Welsh folk song). Anne was laughing so much ThingOne ended up having quite a deep bath that evening.
Posted by Stephen at 10:12 pm