I had the last week off work. We'd thought about going on holiday somewhere, but weren't up for the organisation and upheaval that going away with a seven month old would involve. A couple of months ago we were feeling more confident, but ThingOne's sleeping has taken a turn for the worse. I think staying at home turned out to be the best thing we could have done, as I wouldn't have wanted to be in a hotel and up all hours trying to get ThingOne back to sleep. So we got the grannies over a few afternoons and one evening to babysit and Anne and I had some time on our own. Anne had her first evening out in over seven months!

We'd planned to go to a zoo on Monday, but the weather was pretty dire so we made a snap decision to go to Bluewater shopping centre instead. Whilst there are people who would consider this a good day out, Anne and I aren't two of them. Generally we shun shopping centres. However, we figured:
- it's an hour away so ThingOne can get some much-needed sleep in the car;
- we'd be indoors and dry; and
- there are coffee shops there.

ThingOne seemed to enjoy looking at everything. I think she may have been a bit over stimulated though. 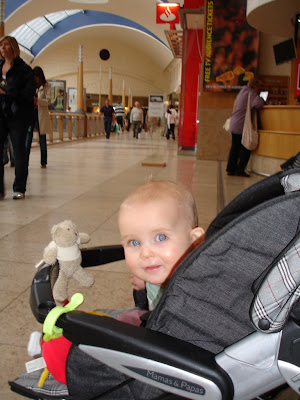 We spent the day doing very little shopping, walking around trying to keep ThingOne as calm as we could, and drinking coffee. In one coffee shop I noticed ThingOne was getting more out of the sports section of the paper than I ever do: 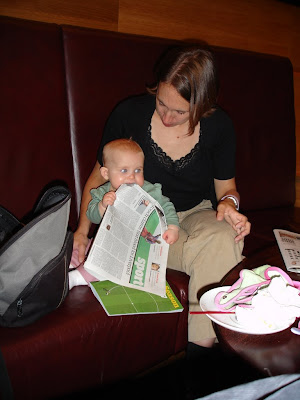 My mum had bought ThingOne a helium balloon, which ThingOne has been having a lot of fun with. A few times we've seen the balloon coming before we see ThingOne coming, so with her now mobile we figure tying a helium balloon to her will help stop us treading on her (I nearly did the other day when I wasn't looking where I was going). This, I suppose, is following the principle used in Jaws when they harpoon some barrels to the great white so they can see where he is in the water. At least the shark wasn't threatening to pull their laptop onto the floor by the power lead. 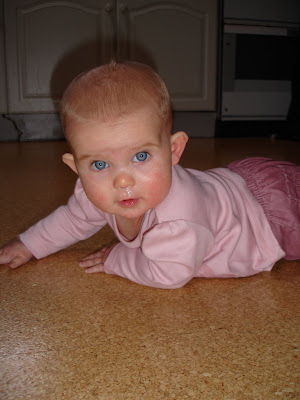 Her "crawling" is pretty funny to watch. She can do a few "steps" on her hands and knees, but finds it much faster to lie on her front and drag herself along with her hands a la James Caan in Misery (after he's had his knees shattered by Kathy Bates).
Posted by Stephen at 9:07 am