We've come on holiday on purpose.

We're renting a house in Fakenham, Norfolk for a week. It's a much needed break for all of us, especially Anne who's supposedly part time job has taken up a lot of time over the last few months. Fakenham wasn't chosen as a particularly glamorous location, but as a convenient base to visit other parts of north Norfolk.

We arrived on Saturday with two over-excited kids having a great time exploring the house. ThingOne has a bunk bed in her room, which is a big hit. In part this is because Peppa Pig has a bunk bed, but it's also because we can drape a duvet over it and make a den.

We forgot that the clocks were changing. This is something that is always an irritation for us, since it messes with the kids' sleep routines. However, being on holiday makes it easier, since we're not under pressure to get our timings back to normal since we don't have a normal routine on holiday.

We looked around Fakenham a bit on Sunday morning. Fakenham wasn't there to greet us since it chooses not to open on Sunday. We did manage to take the girls for hot chocolate, and Anne chose to go into one of the few open shops: a tatty clothes/toy/toiletries shop. I figured she was just going in since it was one of the few places open, but was amazed when she actually started trying things on and after 20 minutes of me trying to stop the kids picking up everything in the shop Anne bought some boots.

To realise how bizarre this is you need to know that Anne a) hates shopping and b) would never buy clothes in a tatty souvenir shop. I really don't know what came over her. She kept saying that the boots were good. Bottle Rocket or something.

As we left I said to Anne "I don't even know who you are any more." And I meant it.

On Sunday afternoon we took a trip out to Foxley Wood for a walk. I think we may have solved the time change issue by wearing the girls out. ThingOne walked for over an hour, and only started moaning about ten minutes from the end.

This morning we went swimming in Hunstanton (an indoor pool - do you think we're mad?) ThingOne seems much more confident in the water nowadays (I should hope so after Anne's taken her to swimming lessons for the last eight months) and had a lot of fun.

It's lovely to be able to spend time with the girls without jobs to do, clothes to wash, real life to live. ThingOne seems to be enjoying herself and ThingTwo is singing, shouting and running around almost constantly.

Having ThingTwo around is a bit like having a random phrase generator. She's spent part of the day listing all the things in our rented cottage which aren't chocolate, and on the way home from Hunstanton in the car, on a very vet and overcast day, suddenly started pointing out of the window shouting "CLOUD! CLOUD!" To give her credit, she was right, but why pick then to notice?

In other news, we can no longer get any good photos of our kids. ThingOne thinks pulling faces for the camera is The Funniest Thing In The Whole World, and ThingTwo copies whatever ThingOne does. I think I'd better brush up on my photoshopping skills. 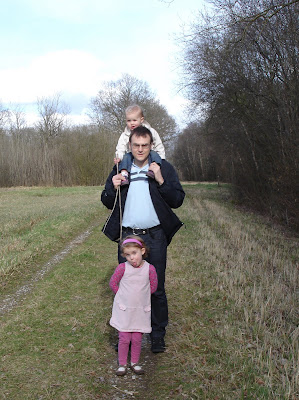 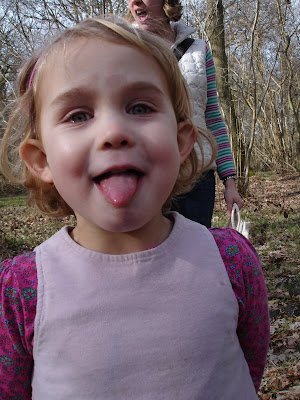 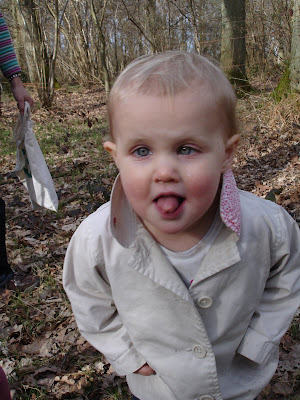 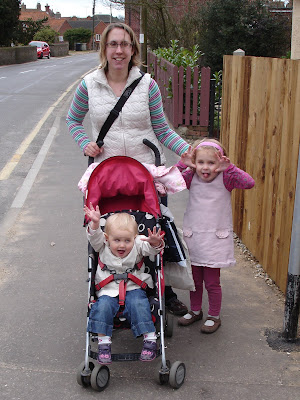