"Spring is here", as ThingOne sings pretending, of course, she is Lola in the episode "I Just Can't Stop Hiccuping".

ThingOne's taking quite an interest in the daffodils, the other blooming flowers, the buds on trees etc. With her new found knowledge of death she's asking what will die and what won't ("Will our bath mat die? Is that a living thing?") and, so far, seems merely interested, not distressed by the thought of death. I try to be philosophical with her ("Imagine if no one died ThingOne - the world would be full up!") The other day I told her that whilst people are no longer around when they die we can still remember them in our heads. "In our heads? Do we eat them?" Best to stick to the basics for the moment.

Seizing on a sunny day, after playing and doing jobs in the garden this morning the four of us went to Wimpole Hall Farm for a Mother's Day treat. (It might have been even more of a treat for Anne if just ThingOne, ThingTwo and I had gone, but I think Anne enjoyed this too.)

We saw pigs with piglets, sheep with lambs, cows, chickens, goats, horses. i.e. farm animals. And ThingOne got to groom a donkey (not in a dodgy, internet chat-room way). We had our first picnic of the year (here's to many more to come) and ThingOne got to see different types of animal poo and identify male and female animals.
L: "That sheep has udders - it's a girl!"
and
L: "Bulls are boys, so where's the bull's winkie?"
S: "Erm, it's that thing underneath"
ThingOne then bent down for ages trying to embarrass us in front of the other visitors, making sure she'd seen said winkie and wasn't mistaking it for something else, and that everyone around knew she'd seen it and correctly identified it.

As a National Trust property, it's not cheap to get in, but they have two playgrounds, so we probably got our money's worth. After a tiring but fun five or so hours in the farm we made our way back to the car. As we passed some temporary toilets in a portocabin I asked ThingOne if she needed the loo. She's never one to pass up trying out a public toilet she's not previously used, so she jumped at the chance.

I partly ruined the day at this point.

I couldn't work out the taps as ThingOne went to wash her hands. I pulled it one way, and pushed it the other and it wouldn't work. I pulled a bit harder, and it broke off in my hand. Water sprayed out all over me, soaking me, the floor, and some men at the urinals. Whoops. I tried to stem the flow but couldn't. I tried to reattach the tap but couldn't. I searched around for a stopcock to no avail. At this point I realised ThingOne was screaming. I turned to see she was standing directly in the trajectory of the water spray. I told her to stand aside, where she'd be dry, but she was too busy being sad and wet. I moved her away and she went, dripping, to find her mum as I shoved some paper towels into the hole to try to stop the water spraying everywhere. Eventually a member of staff appeared (one of the guys I'd soaked had gone to get someone). He knew less than I did about plumbing, but I was happy that at this point I had passed the baton to someone with authority, and skulked out of the portocabin, apologising as I left.

ThingOne was pretty upset, but soon recovered. Hopefully this won't scar her, and it'll be the memory of poo, udders, winkies and donkey grooming that she takes home with her.

Some photos. A pinic on a groundsheet, despite the fact that we own two or three picnic blankets. ThingOne catches some rays: 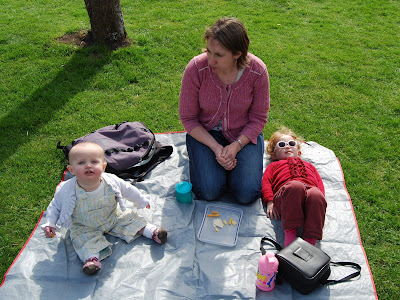 ThingTwo's standing is getting better each day: 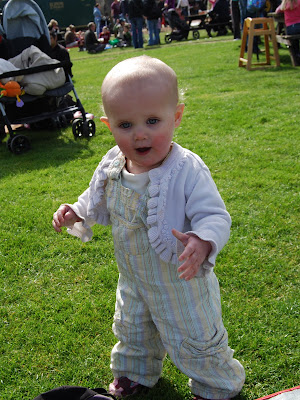 We find somewhere to keep ThingOne while we nip off for a fag: 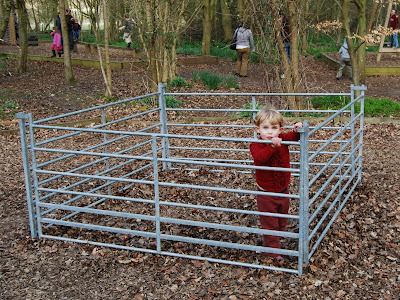 ThingOne gets our money's worth at the playground. This crows' nest was frighteningly high (for me): 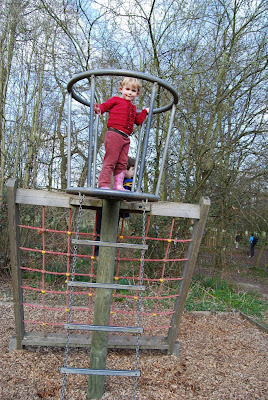