The Four Toothies of the Apocalypse

Through our haze of tiredness, it's great watching ThingOne change and become a little person, with personality and wants. She's starting to get annoyed if you take a toy (or , say, a leaf that she's decided to eat) away from her. That's not going to be a fun trait to deal with, but it's interesting to see it, and everything else, develop. She's moving around confidently now, standing against things and climbing at every opportunity. 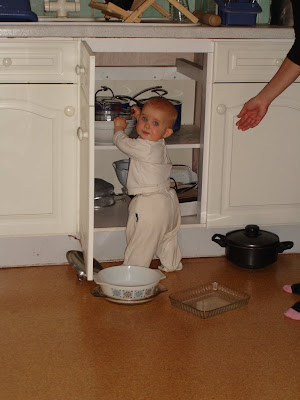 ThingOne's got yet another cold, and it's coincided with about four teeth coming through at once (perhaps the culprits in the small matter of our poor nights' sleep since the start of August). These join the one tooth (well, half-a-tooth really) that's already there, and have made her very clingy and grotty. Anne had been dealing with a grumpy baby for most of Friday when she found the freezer had defrosted as we'd left the door open. A lot of food lost, including about two weeks of meals Anne had made for ThingOne. A disaster. The cost is bad enough, but worse is the time Anne has spent and will have to spend again. Spare time isn't something we're rolling in at the moment, what with needing to be in bed by 10pm most nights due to exhaustion.

I had a stunning victory today though, when I saved a fair amount of money by braving the NCT Nearly New Sale. Here, lots of parents off-load baby-goods. You can save a fair bit of money on reasonable stuff, since babies tend to grow out of things before the wear them out. I got some clothes, but the main buys I heroically fought other desperate parents off for were:

- a stair-gate to stop her getting into the hall (she hates this - she looked through the bars as though we'd chucked her into Guantanamo Bay);

- a sit on walker thing (a bit battered - it's clearly been "pre-loved" but there's no guarantee ThingOne will take to it and Mothercare wanted £50 - ten times what I paid - for a similar bit of plastic); 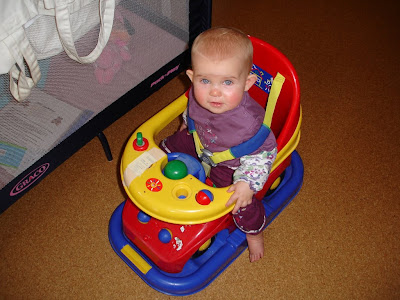 and
- a metal framed baby-carrying backpack.

The last item was a good find, and when we put ThingOne into it and walked her into Cambridge and back we knew I'd made a good choice. She was looking everywhere and beaming with joy much of the time (not a look we've seen much in the last few cold-laden days).

On the way back, about half a mile from home, ThingOne's appreciation manifested itself in physical form when she threw up down my back. Nice. Such is my resigned demeanour, my spirit beaten down into acceptance by almost nine months of parenting and bodily fluids, that I just carried on walking, and haven't yet changed my shirt. I'm sure ThingOne will appreciate my sacrifices in years to come... 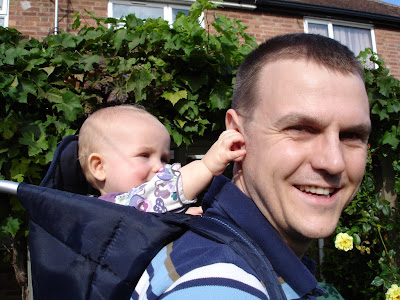 Thank you so much for the information on Pre NCT check. I had to fix my car and I also needed to check NCT of my car For that reason one of my friends had suggested me to go there and the service was really good.