Anne and I are bad parents and should not be allowed to dress our daughter. We needed some more sleepsuits, since ThingOne is proving proficient at vomiting, weeing and pooing all over the place, so picked some up in Mothercare on Sunday. We wanted to avoid pink, so got a cow-themed three pack. Whilst two had pictures of cartoon cows on, we thought the third was particularly snazzy as it had cow-hide effect patterns on it.

We are terrible parents. See the photo of poor poor ThingOne below. 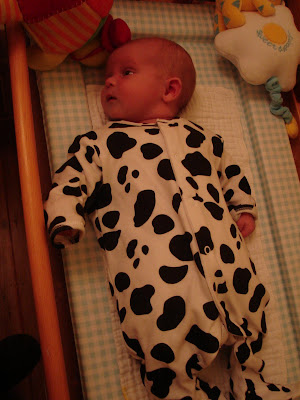 We immediately saw that it didn't suit her. ThingOne obviously hated it, as she regurgitated milk on it within seconds and proceeded to give us one of our worst nights since she joined us.

She's never going to forgive us these mistakes. Especially as we have photographic evidence. As long as we don't show them to anyone I think the damage should be minimal.
Posted by Stephen at 5:31 pm