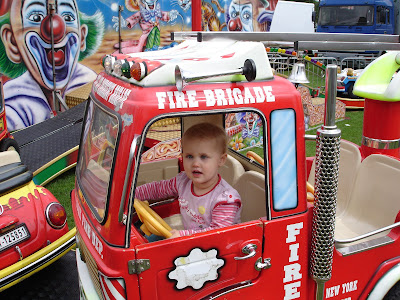 We took the girls along to the Cambridge Town and Country Show on Sunday, an annual event on Parkers Piece with stalls, animals, food and, importantly, fairground rides for young kids. Both the kids love this sort of thing (obviously). We had a good morning wandering around, looking at animals, trying to teach ThingOne that the more she asked the less likely it was that she'd get, and putting the kids on various rides of dubious safety. 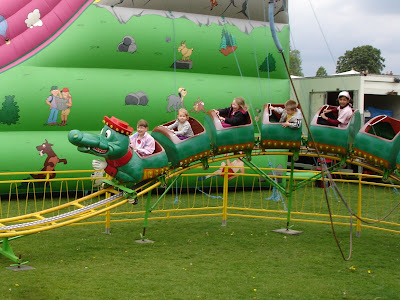 ThingTwo had loads of fun, though she wasn't allowed to go one a couple of the things ThingOne went on. Poor lass. ThingTwo's speech, which took ages longer than ThingOne's to really get going, is coming along brilliantly at the moment and true to form she barely shut up the whole time we were there.

The only dodgy thing we saw there were people walking around offering balloons to kids which, once the kids accepted the balloon, they tried to charge a pound for! There was no notice of price as they approached. This was pretty cunning but pretty bad form. The parents can either pay up or have to explain to their young kids they must return the balloon. I did the latter, obviously. If I'd had a pin on me I might have entertained myself a little with their stock. We're so used to the kids being given balloons on the street or at these sort of shows for free it didn't occur to me they'd demand money after the offering.

We had a picnic lunch, during which the girls seemed most enthusiastic about the raw veg and houmous. Plus Anne's left eye ballooned up after handling a Guinea Pig.

The girls had a great time. The one sore point for ThingOne was the large inflatable slide. She usually loves these, but the one today was a little fast for her (too bouncy really) and it upset her a bit. I was surprised when the nice man running it gave her a ticket to get her on the bouncy slide think for smaller kids which was next to it, and which ThingTwo was playing on.

Fortunately for me I got some video of ThingOne finding the big slide a little too much. It's the first slide she goes down in the video embedded below (or here in HD).

Amazing co-incidence! Alex went in exactly the same helicopter. Or could it be because it was the only purple one?

I noticed that. Lily wanted a plane, but we wanted a helicopter if Isabel was going to join her, but then the operator said Isabel was too young and would have to go with an adult, so Lily had to settle for the helicopter on her own.

BTW, we used to be able to surprise Lily with fairs and such, but I mentioned Parkers Piece to Anne on Saturday, and Lily butted in with "Is there a fair on Parkers Piece? Alex said yesterday that she's going to a fair today. Is it on Parkers Piece? Can we go?"

That was the sound of the parents losing a bit more control.