I realise I've not blogged much about how ThingTwo's getting on. I wrote a fair bit about ThingOne in her first couple of years, but I guess it was all a bit novelty for us. I should write more about ThingTwo.

So here's a status update about Smallest. She's 20 months old. She's (mostly) always been a happy soul, but since she started walking she's been a little delight. Very cheeky, and much more naughty than ThingOne was.

ThingOne would soon learn what she was allowed to touch and what she wasn't. It didn't mean we could trust her 100% but she was pretty good about things. ThingTwo's been harder to control. Like ThingOne she soon learns what she's allowed to investigate and what she's not, but is much more likely to sneak off and have a fiddle anyway. She'll go for the DVD player or the amp, whereas ThingOne never touched these. She'll even do it when you're in the room and will look at you with a cheeky look as she switches the DVD player on. Little sod!

ThingTwo's speech hasn't come on that far yet. By this age ThingOne was speaking pretty well, counting, learning colours, and lots more. ThingTwo, in contrast, barely strings words together. She understands loads though and can usually get her message across without a problem. This frequently involves telling us she'd like some raisins, but she does also like reporting things to us. Through her own made up sign language and a few words, for example, she'll tell Anne that she was in her cot and Daddy came to get her, took her out of her sleeping bag, and then banged his head. Pretty clever stuff. 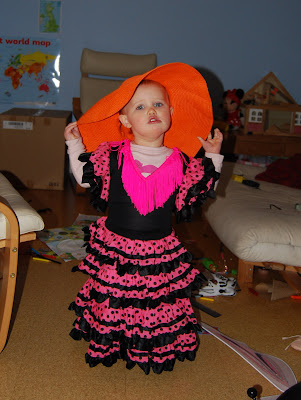 It's not surprising Child Number One was quicker to learn to speak. ThingOne got much more one-on-one attention. We spoke directly to ThingOne at her level loads. ThingTwo's had her share of attention, but spends a lot of time observing and playing with ThingOne rather than interacting directly with Anne and me.

Is this unfair on ThingTwo? Has she got the poorer deal? In some ways I suppose, but it's swings and roundabouts and she also gets some big advantages that ThingOne never had. She's exposed to things a lot earlier than ThingOne. She certainly got chocolate earlier than ThingOne. We'd never have shown ThingOne a cartoon with a dragon attacking someone at 18 months, but ThingTwo will see whatever ThingOne's watching on TV. She's also got the huge advantage of having a big sister to play with and idolise. ThingOne didn't get that (obviously). She learns loads by copying ThingOne, and ThingOne knows it. ThingOne frequently tries to get her little sister to do things she knows she'd get in trouble for doing, like pouring a bowl of water out of the bath and onto the floor. When ThingOne's in a compliant mood however she can also be a great influence on ThingTwo.

This also works the other way. Sometimes ThingOne, who may have become set in her ways, will see ThingTwo do something she herself hasn't done and give it a go. We couldn't get ThingOne to eat any sauces for ages, but ThingTwo's love of any sauce has widened ThingOne's palette and made pasta a much more interesting dish (she's always liked it, but would previously eat it dry). 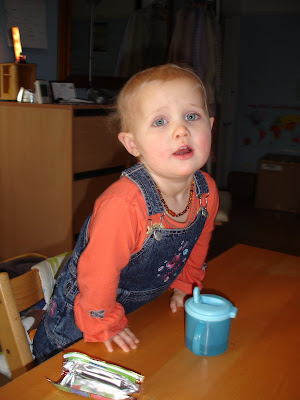 ThingTwo still has very little hair, which has meant she's stayed baby-like for a long time. It's with mixed feelings we can see her turning, slowly, into a little girl. I imagine, with ThingOne's influence, she'll grow up faster than ThingOne did once she gets to a certain age. ThingOne's got ThingTwo to keep her interested in baby things, whereas ThingTwo will be pulled towards older things by her sister.

It's good for us to stop and take stock of where she's at every now and then. If ThingOne's anything to go by things move pretty quickly and can easily get away from you. We've applied for a school for ThingOne to go to next September already. How did it get to this stage already?
Posted by Stephen at 10:27 pm