She will arrive, bringing an earthquake in her wake

At 8.15 on Tuesday evening, with ThingOne asleep upstairs, we were watching Ashes to Ashes (still not sure if I like it). Anne felt a weird pop, and realised her waters had broken. She'd been having contractions for a while, but then she'd been having them on and off for a few days.

A midwife came round thirty minutes later, and things had slowed down a bit. The midwife said she'd see how things went and may go home for a nap if things don't speed up. By 9.25 things sped up a bit, so I helped the midwife get her bits and bobs from the car. At this point the midwife trod dog poo through our hallway. Gah! She and I did our best to clean it up, but also had to try to ensure Anne was OK through her rather painful contractions.

Our second born, ThingTwo Frances, emerged at 10.20pm. Nice one! It all seemed to go so quickly, and I wasn't exhausted like I was last time. Anne seemed pretty well too, all things considered.

The home birth experience was just great. Anne was very relaxed, as was I (but then I didn't have to do too much). The mess of the birth was nothing compared to the dog poo trail (a shower curtain laid on the living room floor helped with the former).

Around 1am, the midwives having long gone home, Anne and I were downstairs in the front room (where ThingTwo was born). The house seemed to shake. Our first thought was that ThingOne had fallen out of bed (she'd slept through the birth). We found out later it was an earthquake. I like to think the earthquake was announcing ThingTwo's arrival, and have chosen to decide to pretend to take it as a good omen.

We all got some sleep last night, though ThingTwo mainly wanted to feed. I'm off to take ThingOne to playgroup soon.

Welcome to the world and to your new home ThingTwo. I'm sorry it smells faintly of dog poo. 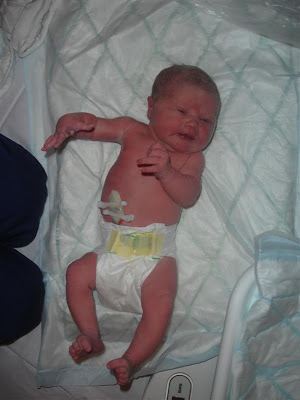 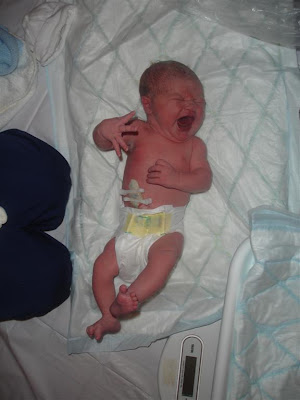