After several weekends in a row away from home, we've just had two weekends around Cambridge. Plus I had four days off work which were spent doing a bit of painting (walls and skirting boards rather than pictures of trees and helicopters) and spending time with 'the family' (this did involve drawing rather a lot of helicopters for ThingOne).

It's been great, and ThingOne has been on top form. Recovering from her illness has meant she's been eating for England, and she's been full of beans. We've been out for walks, swimming, to the park (a lot of times) and to 'Cheeky Monkey's' indoor play area.

- dragon flies. I pointed one out to her last week and now we've noticed that just about every (children's) book we've got has one in it somewhere.

- baby kangaroos (she has a book featuring one, and spent part of yesterday with a toy kangaroo in the 'pouch' of her dungarees. This could be useful when we try to explain there's a baby sibling coming into her life.

- Letters. She keeps trying to sing the alphabet. I think it's just a song to her, but I'm not too keen on her learning another new thing as she's already counting to ten and learning about numbers. That said, I'm not going to stop her if she wants to talk about them. She's like a little sponge soaking up new information. My concern would be that all these new concepts will get confused with each other, but I guess that could be cleared up later. She really seems to like saying "Double-U". I've also got her running about the house with a plastic L (for ThingOne) held on her forehead. I thought this was funny as this indicates 'loser' in modern youth-parlance. She then had Anne and I with an M and D respectively (for Mummy and Daddy) on our foreheads.

Today when she was trying to ask me to do somethng for her I said, "Do you want me to take the lid off your water cup?". She answered "yes".
Trying to get a 'please' out of her I said "Yes what ThingOne?"
"Three bags full", she replied. 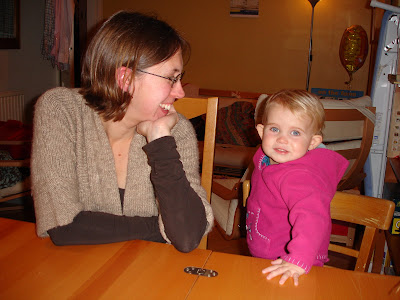