In which ThingOne makes movie-and-TV references, and her parents hang their heads in shame

1) Gremlins
I'm proud to say I've got ThingOne shouting "Bright light, bright light" like a Mogwai (from Gremlins) when a light is turned on. (Here's a sample from the film. Needs sound, of course. Might not work if your browser doesn't have the relevant plug-in)

That she says "dark light" when we turn a light off is mildly amusing to me too, but since it's not from a film it doesn't count as an inappropriate movie/TV reference.

2) Pulp Fiction
Continuing on this theme, I have accidentally trained ThingOne to shoot her mother with a mchine gun (a pretend machine gun of course) when the toast pops up in the toaster, as in this clip from Pulp Fiction (from about the 50 second mark). I did it one day and ThingOne copied, and now does it fairly often. Her machine gun impression is pretty poor, and really she just waves her hands around and makes a noise, but it's a little disturbing.

3) 300
Having seen and enjoyed 300, I tried to train ThingOne to shout "SPARTA" in a macho way at the top of her voice. This worked to a certain extent, though she generally just makes a very loud noise. She finds it really funny though, and I'm looking forward to the day she gets the word right and can shout it round Sainsburys (when she's there with her mum, preferably).

4) Mission Impossible
Many of you will already have seen the mission ThingOne was sent on when she was just seven months old:


5) 24
This is the embarrassing one that makes us look like terrible parents.

It's Anne's fault. She said "Dammit" when she dropped something on the pavement the other day, and ThingOne repeated it. Anne tried to convince ThingOne she'd actually said that something was "jammy", but ThingOne was having none of it.

And so, ThingOne has now been shouting "Dammit" quite a lot, generally when something is on the floor or is dropped. She's like a little Jack Bauer.

We're torn between finding it very funny and trying to stop her doing it. We don't really know how to stop it though. ThingOne and I were at my mum's today and I went to put a potato on ThingOne's plate. It fell off the spoon and onto her plate, and ThingOne shouted "Dammit Daddy!" My mum and I couldn't stop laughing, but we both tried hard to hide our laughter from ThingOne. My mum had to leave the room.

What have we done? For our own amusement we've created this little imitator, but I feel we've lost control of her. It's Frankinstein's monster all over again! 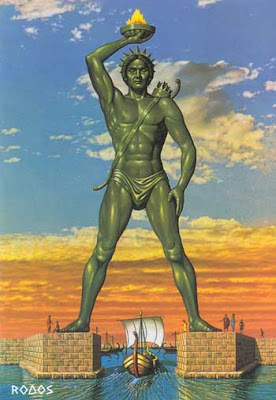 And here's how Anne discovered ThingOne the other day after she'd been playing one of her favourite games: emptying out the kitchen cupboards and playing with the salad spinner: 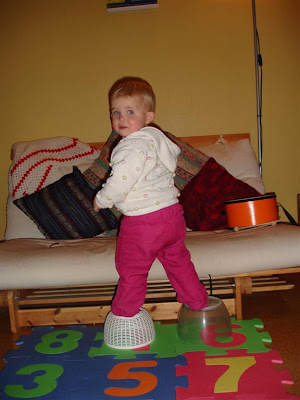