The boniness of the long distance runner

In February Anne and I decided to try to be a bit more healthy. We did this by eating better, monitoring portions, drinking less and getting more exercise.

I started a Couch to 5k training plan, having been inspired by, of all people, Charlie Brooker. I used a similar iOS app to him, which would let me listen to my music or podcasts and occasionally give me instructions. "Run for 30 seconds", "Now walk for a minute", "Stop slouching".

It got me running for 30 minutes over about three months, and to my surprise I found I quite enjoyed the running. Having taken it up as a way to burn calories so I could eat more cake, I wasn't expecting to enjoy running for the sake of it. I'd liked the convenience of being able to run anywhere, without sticking to the schedule of exercise classes, but in the end it was the relaxation of the time alone and finding new routes which I enjoyed.

Once I was running 30 minutes (which I assumed was 5k) I decided to challenge myself by entering a 10k run in May. I started tracking my runs with GPS and Run Keeper on iOS, and was surprised to find I was running much faster than I realised, and that getting to 10k didn't involve much more running (I finished my 10k event in 46 minutes).

I found the running, along with the healthier eating, had meant I'd shedded weight much more, and more quickly, than I intended. My challenge then became how to increase my intake suitably in such a way as not to lose more weight whilst still eating healthily, and ensuring I did other exercise to ensure I didn't end up stick thin with a weedy upper body. I've ended up having to get the waist on my trousers taken in, and buying new clothes in sizes I've not worn since I was in my mid teens.

Over the summer I consistently ran three times a week, 7k twice in the week and 10k at the weekend. I took to early morning runs, rising at 6am so I could get back before the kids were up. I loved being out at that time, though can't say I enjoyed waking so early. I enjoyed the flexibility of still being able to run whilst on holiday (and had some lovely runs along a river in The Netherlands near to where we were staying).

I figured I'd do some more 10ks this year, and try a half marathon (21k) next year. But then I got over excited and signed up for the Perkins Great Eastern Run (half marathon) in Peterborough which took place yesterday. I worked out a training plan, figuring that doubling my distance would just be a matter of more of the same.

I found it a lot harder than that though. As my distances got up (gradually) to 15km and over and over an hour in time I found I needed to adjust what I was doing to ensure I was hydrated and 'fuelled' (i.e. I needed to have a banana and some water before I ran). As the half marathon approached and my training runs went from 17k to 19k my left knee started hurting. I had to ease off and then completely stop running. I'd been planning to ease off anyway as part of my plan in the fortnight before the event, but in the end my tapering became extended. I started swimming more than running to give myself some low-impact exercise.

So yesterday, with my knee feeling OK, I drove to Peterborough to do the HM. The drive made my knee hurt a lot, so the signs weren't good.

I always listen to music or podcasts when I run. I recently found that the issue of running with headphones leads to some strong feeling, with some proper runners having a strong dislike of people who do it. Some events ban headphones for safety reasons, but this event was so big it wouldn't have been enforceable so I was OK to use them. I only had one headphone in, so I could listen to music, and Run Keeper cues, whilst still being aware of people around me.

Someone had lent me a CD of 101 running songs, so to keep things fresh I decided to use that on my run without reviewing which songs were on it. It was a strange mix, and did have the intended effect of keeping me on my toes. There were some tracks I'd never have on my iPod (Katy Perry, Brittany Spears) and some very cliched running songs (Keep on Running), along with some nice surprises. Appropriately for the soundtrack to my run I kept mainly to the middle of the road when I was running.

My knee ached for the first few miles, but I soon stopped noticing it. Whether that's because it was OK or because I was numb I'm not sure.

Since training for a 10k I've not seen any point in switching between KMs and miles, so my training has been getting me to the point where I felt I could attempt 21k, rather than 13.1 miles. I split the course in my head into three 7k runs, which seemed to work well. I'd been aiming for a pace of 5 minutes per KM, which would have kept me under 2 hours. However, I soon found I was running faster than that, being caught up and motivated by the runners around me. I thought about slowing down to pace myself better, but am not very good at doing that. By the time I started the final 7k stretch I was starting to feel tired, but also motivated to go on by the feeling of being nearly there.

My mistake was, having focused on KMs rather than miles, I saw the 11 mile sign and thought "Only a mile to go". I then reached the 12 mile sign and thought "Hang on, there are just over 13 miles in a half marathon. Not 12!" This made the final mile a bit more of a struggle, but I saw my mum, who'd come out to see me finish, when I had a few hundred meters to go, so that boost saw me nicely along the finish line.

I'd suggest to Anne that she and the kids not come, since I didn't want to be worrying about whether the kids were cold/wet/bored when I was selfishly focusing on me and my aching legs. It was great to have my mum there at the end though. I was handed jaffa cakes, millionaire's shortbread and a banana after I'd finished by some very nice people working at the race. Amazing that such small pleasures can be so welcome.

I finished in 1 hr 42 minutes and 8 seconds (chip time), which I gather is a good time for a first half marathon, and I was pleased. It was a nice flat course, so a good one to start with. Not very scenic (Peterborough isn't particularly beautiful), but the race was well organised and I enjoyed it a lot. Mum and I went to Nandos for lunch, and I've never felt like I've earned chicken and chips in the same way before. 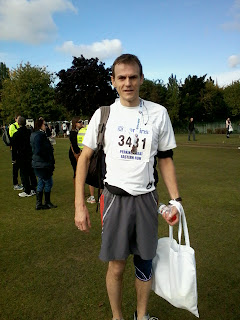 When I got home I made the mistake of taking the kids to the park on their bikes. I'd forgotten this mean I'd have to run alongside ThingTwo, who has recently started cycling without stabilisers, and is likely to cycle into trees and fences.

Today my thighs are killing me, and I'm struggling climbing stairs. I feel good though, and am keen to, after some recovery time, build my runs back up gradually and focus on running without my knee hurting.
Posted by Stephen at 10:44 pm

Hm, its interesting way to use newest GPS techology...Wanna tell you that me and my girlfriend are planing to go to Jamaica by our boat, and I think it will be unforgetable experience! By the way we will use Uboro - this is great GPS tracking service, if you are interested you can visit their official site