We were concerned that our planned trip to Liverpool to spend Christmas with family this year might be threatened by the bad weather, but we needn't have worried. Even if the weather had been fine the illness (presumably flu) which has hit ThingOne and Anne hard in the last week would still have forced us to reluctantly cancel our trip - sorry Kerry, Mark and Jo.

And so we've quarantined ourselves at home for a few days. ThingOne seems to be mostly on the mend, though is still exhausted (which unfortunately means grumpy some of the time), but Anne is still completely wiped out. We're hoping to venture out when fit enough, but for the moment we're going to make the most of a smaller Christmas with just the four of us.

Today I've been dashing round the supermarket to get some supplies for an unplanned Christmas, we've done a treasure hunt in the house, we've tracked Santa on the web, we've watched the Peppa Pig Christmas episode three (three!) times and we've had a fun, if subdued time. At 5.30 we all sat down together to have spaghetti bolognaise. Having dinner so early is odd for Anne and me, but this is outweighed by how much the girls enjoy it when we eat together. 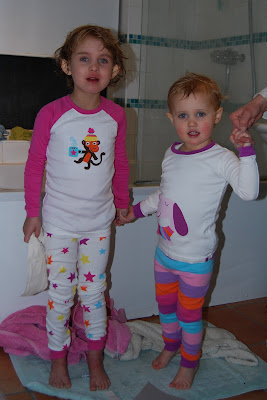 The girls are in bed now, in their new Christmas pyjamas, desperately trying to sleep lest Santa should skip the house. I'm hoping this will lead to a good night's sleep for us, something we've not had in a while thanks to ThingTwo's messing about in the evenings and also due to the myriad virii and bugs we've recently encountered.

Here's a vid of the girls at bed time singing a Christmas song...

And here's the aborted one I shot first. Whoops!