A week's holiday in mishaps

"Nurse, I think we need to contact Social Services. The injuries on this child could point to a sustained history of violence and abuse. Either that or a week's holiday in Hampshire."

We've just returned from a week in a holiday park on the south coast, near the New Forest. We had a great time. The theme of the holiday seems to be bruises, accidents and vomit.

Saturday
Both our kids are prone to car sickness. We were lucky on the three hour journey to the south coast to get away without any sickness.

Until, that is, we pulled into the car park of the holiday park we were staying in. I turned off the engine as I parked, and that was ThingOne's cue to show us her lunch.

Sunday
ThingTwo had slept in a bed for the first time ever, and, though she got out of bed and opened the door once (cheeky monkey), she didn't fall out of bed.

ThingOne, who always sleeps in a bed, did fall out of bed in the night. She told us the next morning that she had woken in the night to find she was on the floor. The fall hadn't woken her. She had a large bruise along her cheek and behind her ear where she had hit the bedside table on her way down.

In the morning ThingOne banged her forehead on a metal bar as she climbed up a climbing frame. Much sadness. Later I could see it was about to happen again so I called out to her to watch out. My calling distracted her and may have been a contributing factor to the repeated injury. Even if it wasn't she mainly blamed me.

After lunch ThingTwo tried to squeeze between my chair and the cupboard behind my chair to get past. I tried to move my chair forward but ended up just tipping it forward and then back again. As it tipped back it squashed her head against the cupboard. That one was pretty traumatic for all involved. Anne looked at me like I'd done it on purpose.

Later, ThingOne jumped on me, tickling me as I lay on the sofa. My involunary reaction involved elbowing her in the eye. 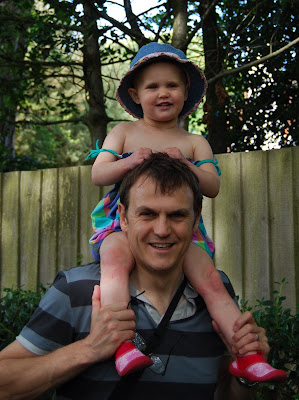 Monday
We visited Christchurch on Monday and had a look around. We went to the cathedral for a peek. We've never spoken to the kids about religion, but I thought that given that ThingOne will be forced by archaic rules to partake in some form of outdated worship once she gets to school in September I'd explain to her that people built churches like this so they could think about Jesus (she knows Jesus from Christmas of course). ThingOne later referred to the cathedral as "Jesus's castle", so I think I did a good job in explaining it.

Before we went out ThingTwo was standing on the edge of our bed with her hands in her pockets. I thought she was in danger of falling, so moved towards her. What I didn't predict was that ThingTwo would simply jump off the bed, hands still in pockets, banging her eye on a shelf as she fell forward after landing.

Later as we left the swimming pool ThingTwo fell on Tarmac, grazing her knee. A fairly dull injury by our standards.

Tuesday
We went on a day trip to the Isle of Wight, and met up with some friends who were there on holiday. We met at The Needles, and after a relatively long walk to the viewpoint at the top of a hill we walked down to get some lunch.

I'd been carrying ThingTwo much of the way, but on the way down I told her she had to get into her pushchair. She agreed, on the proviso that she not be clicked in. Foolishly I relented. After a while she started bouncing up and down in her seat. Jump up and down once more, I warned her, and I'll click you in. Immediately she leaped out of the pushchair, landing sprawled on the Tarmac. She was lucky to get away with just grazed elbows.

I clicked her in after that, but it could be said that the horse had bolted.

On the ferry/boat back to the mainland, ThingTwo had an argument with another two year old girl for almost the entire 30 minute journey about whether we were on a boat or a ferry.
"It's a boat."
"It's a ferry."
And so on.
I predict she'll be a barrister. She's very sophisticated. 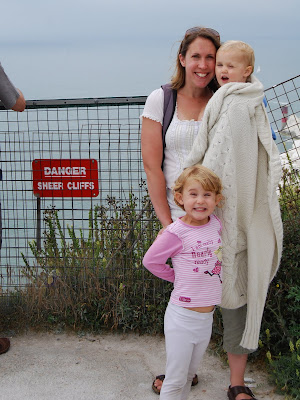 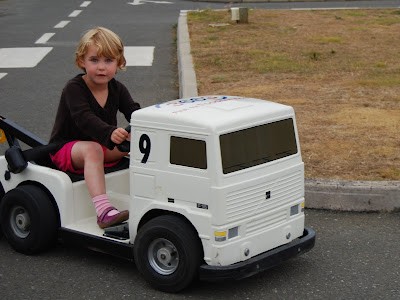 Wenesday
No injuries of note. This is quite special.


Thursday
We went to Long Down Activity Farm in the New Forest and had a great time. There were lots of opportunities to feed animals, trampolines to bounce on, and one of those activity cages for kids with slides, ball pit etc.

This is where the most disturbing injury of the holiday happened - the one that makes me wince to think about it, and the image of it kept me awake that night. ThingTwo wasn't very good at getting out of the ball pit. She'd push herself out over the metal bar and land on her head, usually rolling over. The ball pit was out of our reach as it was within the 'cage'.

One time, Anne and I both watched, helpless, as ThingTwo rolled out onto her head, and then her body bent over in a most unnatural way, that looked like it might do serious damage. She stood up and looked dazed. She then burst into tears and staggered about. I had to get her out through some padded rollers and she complained through her tears for a few minutes that her back was hurting. I'm not surprised having seen how she fell. I'm wincing as I write this.

ThingOne must have sensed our upset, as she later provided a much more light-hearted mishap when she fell down the toilet as she tried to twist round so she could look at her poo. Anne could barely control her laughter as she was faced with ThingOne's head, arms and legs sticking out of the toilet seat. 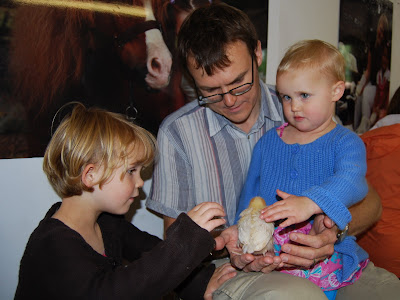 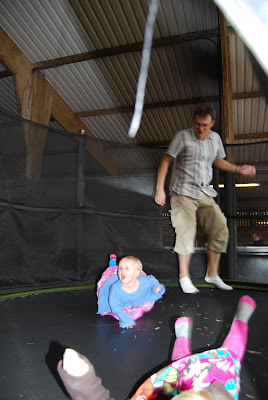 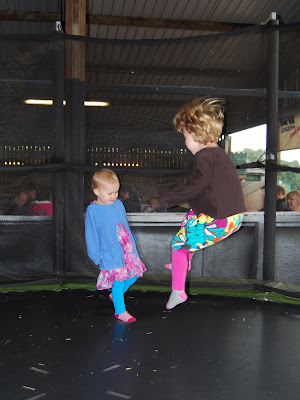 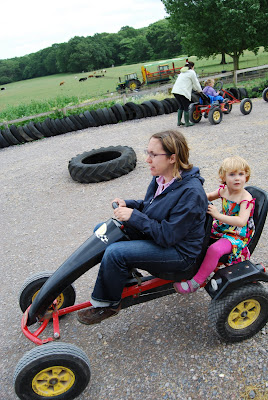 Friday
We spent the afternoon at a New Forest museum in Lyndhurst, at which the girls did dressing up and playing. Aren't museums great!

For the third night in a row we went to the toddler disco in the holiday park. The girls had a great time at these, dancing like divas, cuddling adults dressed as squirrels, and showing off. We nearly didn't make it on the Friday as ThingOne kept throwing up for seemingly no reason. We think it may have been an allergic reaction to something,. but can't work out what.

ThingOne was determined to go to the disco as it was out last night there, so rather than milking her sickness as she normally might she soldiered on.

As she left the disco, exhausted, she fell and grazed her knee. Probably the most blood from any injury we had on the holiday, but pretty tame by the holiday's standards. Despite walking all the way back to our cabin/caravan after falling, once we'd put a plaster on her knee she hobbled around like she'd been seriously injured. Drama queen! 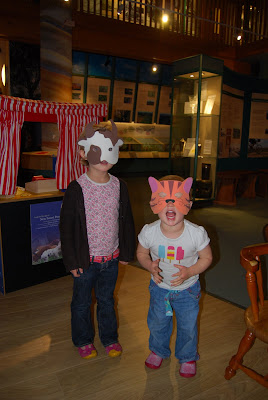 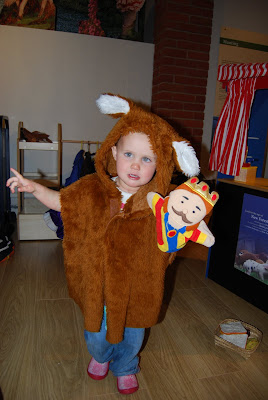 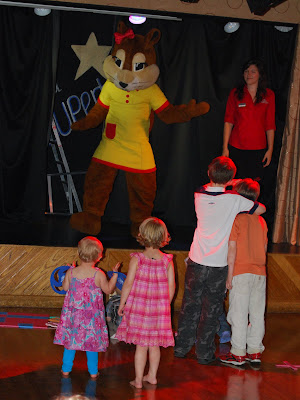 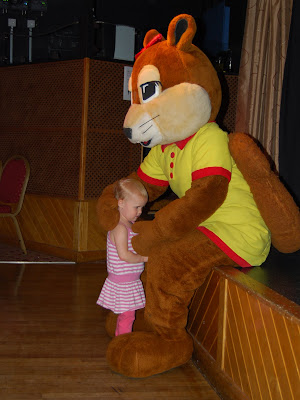 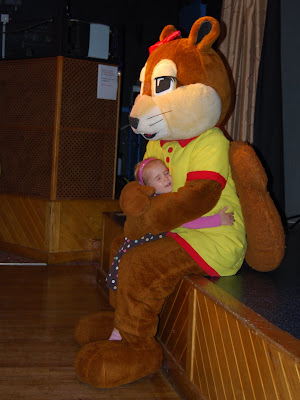 Saturday
We went to Anne's dad's for a few days after our stay on the south coast. Less then thirty minutes into the three hour journey ThingTwo was sick all over herself and her seat. We cleaned up her and the car, and changed her clothes, but still did the rest of the journey with a strong smell of vomit in the car.

Didn't holidays used to be about rest and relaxation?
Posted by Stephen at 10:42 pm

Sounds like an eventful holiday to say the least- bruised, battered and with memories which will stay in their minds, so one day they'll turn to you and remind you of their traumatic holiday... Btw, did you get any footage, especially the loo episode...!? You can get them earning their way on You've been framed...

Most of those injuries are par for the course really (other than the particularly dramatic ones).

We didn't have time to grab the camera when Lily fell in the loo unfortunately, since she was too upset. I'd have love to have got a few shots of it though. I didn't even get to see if.