We normally shy away from long car journeys with the kids, but we'd arranged to visit people two weekends in a row, so were pretty chuffed when the traffic was a breeze on the way to and from Hastings two weekends ago. We were there visiting friends, Ian and Sarah, who have an almost-two year old girl, Millie. She and our two got on pretty well, and Millie especially impressively handled two interlopers arriving to play with all her toys. I like to think we performed a service by giving Ian and Sarah a glimpse into their future when Millie reaches three and a half, with all the constant questioning it brings.

ThingOne knew she was turning three and a half on the Saturday, and was convinced there'd be cake, if not presents. As it was she was satisfied with her first ride on a roller coaster. I went on with her, and she beamed all the way round, screaming in appropriate places. It was, of course, a kids' roller coaster. This was apparent as I couldn't close the safety bar, being as I was too big for the carriage. The attendant seemed satisfied that my mass jammed in the carriage would prevent ThingOne from falling out so the bar was not needed.

This last weekend we visited Simon and Kate in Birmingham. They have two boys: Sam (nearly 9) and Nathan (6). Unfortunately the traffic gods weren't so kind to us this weekend and we spent two hours driving four miles on the A14, making it a four hour journey overall. Gah! To make matters worse ThingTwo was (voluminously) sick all over herself and her car seat just before we hit the queue. We stopped the car, changed her and tried to clean it up, but throughout the rest of our slow, stressful journey the car stank. I'd brought snacks for the kids, and had fortunately found half a pack of chocolate buttons in the cupboard. They helped keep the kids placated as we crawled along the road. We heard Imelda Staunton reading "The Gruffalo and Other Stories" more times than I care to remember that day.

The weekend was great though. It was interesting to see how ThingOne and ThingTwo reacted to having older boys around. They were both pretty keen on them. ThingOne wanted to do everything they were doing, and fortunately Sam and Nathan were pretty keen on the girls too. They showed the girls their chickens, and let ThingOne help feed them. Sam played music for ThingOne to dance to, and they also showed her how to play with their Wii console. I'd been wondering at what age I could get one of these and justify it as being "for the kids", but I don't think ThingOne's quite there yet. Maybe by Christmas...? 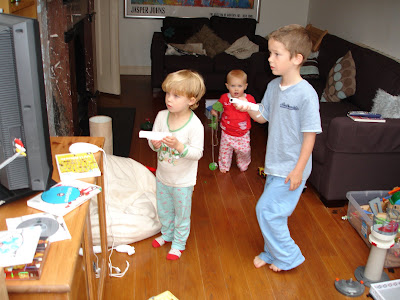 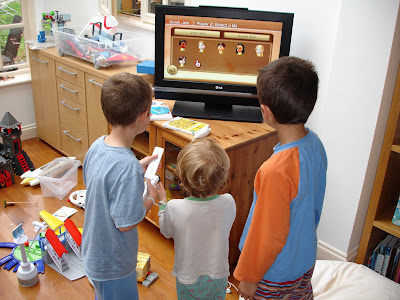 I'd never played with a Wii either, and Sam was keen to play the tennis game against me. I was a little confused, buy managed to pick up how to hit the ball, and even won my first game. I was pretty pleased. I then realised I'd just beaten a nine year old at his own game and wondered if that was the done thing. He was a little quiet. I let him win the next game and he was excited again. I think I'd managed to restore balance to the universe. I'd better get better at this aspect of parenting by the time my kids are competitive.

I was pleased that a skill I'd learned as a child was still valid today when I saw the boys playing with a Rubiks Magic. I showed them that I could complete it quickly (it just came back to me), and Sam shouted "Sick!" "Oh, can you smell it?" I asked? I checked to see if ThingTwo had been sick again, or whether I had any on me. Anne burst out laughing and called me an old man. I was baffled.

You see, it turns out "Sick" means that something is good. Sam was attempting to convey that he was impressed by my aptitude with the Rubiks Magic. How is anyone supposed to know what "Sick" means nowadays? It's just bad English. I felt very out of touch. I'm just glad ThingOne's too young to be embarrassed by me. When does that start? How long have I got?

On Sunday we drove out to a National Trust property to play in the gardens. Simon kindly took us on an extended tour of the countryside first, before we offered to take the lead and use the sat nav to find the place once Simon had admitted he was lost. (It turns out he had a sat nav in the car but hadn't realised it was there - bless.)

The kids had a great time playing hide and seek in the gardens (as did we). ThingOne especially was loving playing with the big boys, and keeps talking about how she followed Sam into a bush to hide. This is quite impressive, since ThingOne's normal idea of hiding is to lie on the floor in plain sight and then jump up and shout "Here I am" as you walk into the room.

I'm pleased to say the journey home went smoothly, and vomitlessly.
Posted by Stephen at 10:07 pm

I don't know if it is any help to you but Alex makes us play Mario Kart for hours on end so she can watch the Princess drive round and round. She is getting the hang of it herself.

Given that she first asked if she could borrow the real car a year ago I'm not sure that encouraging her is wise at all.

Sick in the car at the beginning of a journey is just grim!