Seven weeks older and what have you done?

Well it's been a while. How are you? Really? Well, that's enough about you, here's what we've been doing...

ThingTwo is now seven weeks old, and the tiredness is showing on us. She's settling a bit better in the evenings now (some nights better than others) and things are moving in the right direction. She's continuing the trend of being bigger than her sister, which is as well since ThingOne is very bossy and ThingTwo will need to be able to stand up for herself as she grows up.

ThingTwo has lost that pickled-baby look and is starting to show some interest in things and show some personality. Her smile, when it shows itself, is lovely, and we remember from the first time around how a baby's smile can lift you up just when you're feeling at your lowest ebb (e.g. during a particularly tiring day or night time nappy change). 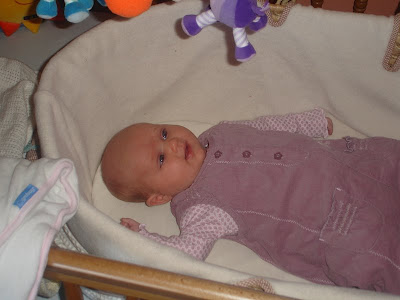 Despite it being a lot harder with two (since there's now a toddler running around demanding attention in addition to the baby to wrangle) we're finding we're not as wiped out this time, presumably because we've been conditioned by ThingOne not to expect much time to relax, and we're starting off with realistic expectations of what we can achieve (though my mum's on my back to get round to sending out thank you cards so maybe we haven't achieved as much as we ought to have done). 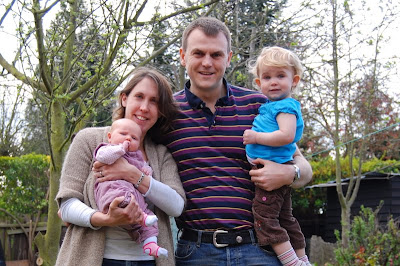 Having two has made us wonder why we found having one such a stretch. When we're alone with ThingTwo now things seem easy peasy. ThingOne was at nursery for the morning a week or so after ThingTwo was born and Anne, ThingTwo and I went to the shops to pick a few things up. Anne carried Newborn in a sling, and we barely noticed she was there. We sat down for a coffee and read the paper while Anne fed ThingTwo and just thought "This is so relaxing. Why didn't we relax more with ThingOne?" In contrast, we went to Starbucks a couple of weeks later with both the kids and it was manic, with ThingOne asking questions constantly and running around a lot. I nipped off to get her a Mr Men book I could read to her, and the newspaper I'd (foolishly) bought didn't get a look in.

Incidentally, I enjoyed Mr Men books as a child, but they now seem to me to be mainly slightly worrying morality tales. In many of the books less-desirable characteristics are beaten out of the Mr Men with violent malice. Maybe we should stick to Charlie and Lola?

ThingOne is taking to ThingTwo really well. Not much jealousy - the worst that can be said is that she's overly enthusiastic and wants to cuddle "Izzy-Winky" (as ThingOne calls her) a bit too hard. It's really nice to see ThingOne enjoy having her sister around. Things might be different once junior is on the move and interferes with senior's things.

ThingOne seems to have upped her attempts at cuteness, though I'm not sure if this is a product of her trying to get attention or whether it's just because she's now two (her language keeps taking big leaps, so that helps). In the last month or so I've had her saying to me:
"Daddy, come and pick both your girls up"
"Daddy, be careful with ThingOne! This little girl precious. All the children are precious." (No idea where she got this.)
"Daddy you cheeky man!"

She also told me yesterday when I recommended she not dip her bread in her drinking water that she was "supposed to" do this. (Meaning mummy normally doesn't stop her.) "Supposed to" has been her phrase du choice this weekend, and I find it hard to argue with her when she's being cute. So long as she doesn't start using this to her advantage everything should be absolutely fine... 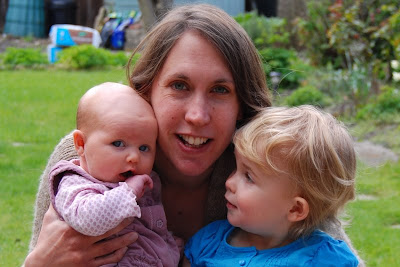 On more important matters, in the last year I've been watching The Wire on DVD. It's been described as the best TV show in years, and I'm inclined to agree. I've now finished the fifth and final season and am going through withdrawal. Amazing stuff. Very much recommended and I'll be forcing ThingTwo and ThingOne to watch it when they're of age.
Posted by Stephen at 8:49 am