ThingOne went into a bed last weekend. It's gone well so far (she's only fallen off the bed once, and even then stayed asleep) but then I don't think she's realised she could leave her room if she wanted. When she does realise this we may be in trouble.

Somehow, ThingOne knows who Homer Simpson is (she calls him "Simpson" and so sounds like Mr Burns.). I don't know how. It's possible I told her at one point, but if I did it was a long time ago. Anyway, I gave her a picture of Homer that was in a magazine, and she seems to like it. This led to slightly bizarre time this morning as she and I danced (jumped around like loonies) to One Week by The Barenaked Ladies (ThingOne's current favourite song to dance to). As she 'danced' she was shouting "Look Mummy! Look Daddy! Look Simpson!"

The first Saturday of December is the Mill Road Winter Fair in Cambridge, and we took ThingOne down Mill Road this afternoon to see what it had to offer. I'd thought they might close the road to traffic, but apparently not. Still, we saw some good stuff. ThingOne liked going in a church (was amazed by the high ceiling) and danced like a mad thing to a Samba band.

Best of all though, we bumped into a load of Stormtroopers, Boba Fett and Darth Vadar. I told ThingOne they were robots, and she seemed quite impressed. She thought she'd finally seen some real robots. I got our photo taken with them, but ThingOne got a bit upset at standing so close to them.

But then it's not all about making her happy is it. At least I enjoyed myself. 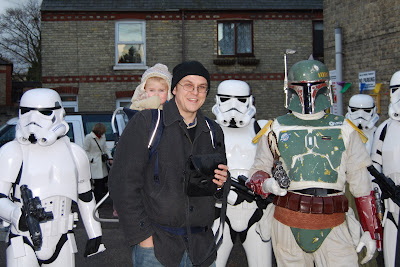