ThingOne's taken to walking more than crawling in the last couple of weeks, and seems to be having a whale of a time. Given she's also been pushing through four molars in the last few month that should probably be "wail" of a time. See how I play with words? 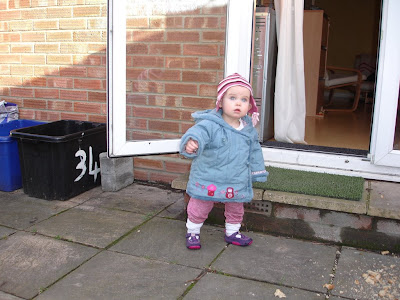 She's learning a few words. She says bye-bye a lot when we leave the room, when she WANTS us to leave the room (charming!) and when she hides a crayon in her truck. She also says hiya.

She's said mama a few times, but not necessarily aimed at Anne. It more usually means she wants us to show her this, her favourite YouTube video (yes, she will have a minuscule attention span, I know).

No sign of her calling me dada. She used to say it a fair bit, but seems to have stopped. Maybe she'll call me Stephen in the style of Bart Simpson. (Bart Simpson calls me Stephen.)

ThingOne does impressions too. She can do a squirrel eating a nut, and a fairly good lobster (odd, I know).

She's become obsessed with clocks in the last week, I imagine because she's taken by the idea of the unstoppable passing of time. SHe mainly shows this by pointing at clocks a lot and chanting tick tock. It doesn't sound much like tick tock but is in the same rhythm as I say tick tock to her in when she points at a clock, and she finds it very funny when I say this. I like an audience that's easy-to-please.

Since turning a year old ThingOne has become a lot of fun. There's lots of smiling and laughing, and, illnesses and teeth aside, she's generally a happy little one. She'll generally entertain us and stop us from doing any chores we ought to be doing. He she is stopping Anne putting the washing away by wearing a pair of my boxer shorts on her head: 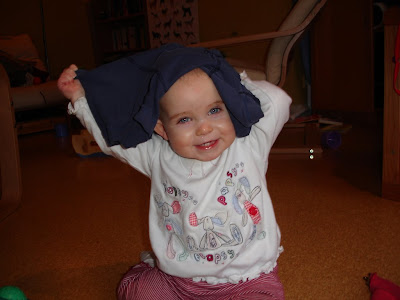 Meanwhile, the little free time I have has been spent installing Ubuntu on my laptop (dual booting with XP). This is the popular Linux-based operating system, and I'm enjoying the geekiness of it. I'm also rediscovering the joy of computer games, having installed a few simple shoot 'em ups on it. Ubuntu's Beryl desktop manager can give Windows Vista a run for its money, though I find a lot of the effects gimmicky, so turn them off usually. (I turn them back on when I want to impress people though. Now I just need to find someone who'll be as impressed as I am with a whizzy PC desktop. Ahem.) Here's a video of someone playing about with Ubuntu. That's right - look impressed!
Posted by Stephen at 10:16 pm