It's been a busy time. ThingOne's coming on leaps and bounds, though her leaping and bounding aren't coming on very well at all. She keeps teasing us that she may walk soon, but then she's been doing that for a while now.

Anne and my mum were in a shop a month or so ago and Anne got a push-along trolley off the shelf to see if ThingOne liked it (by liked it I guess I mean did she go towards it or crawl away screaming). She certainly did like it, as she stood up against it and ran away from Anne, pushing the trolley across the shop! Anne was astounded and nearly moved to tears. It must have been quite a sight (though she's been cruising along the furniture for a while we'd never seen her do this). My mum bought the trolley (spoiling her granddaughter!) and she and Anne took great pleasure showing me the new trick when I got home. 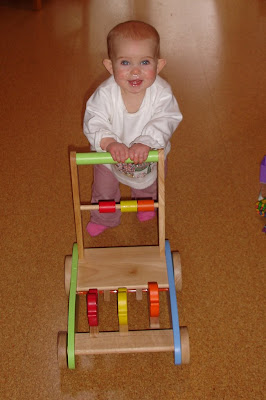 ThingOne's saying a few words, notably "duck" ("Du!") and "Dada" (which I love, but she says it to the washing machine as well as to me). More so than her talking though her understanding of words is coming on well. She knows what "din-dins" is (are?), and understands "bye bye" (she waves) and hello. She obeys "clap your hands", "touch your nose" and "nod your head" (when she feels like it) and waves goodbye to the Teletubbies at the end of an episode. We have a magnetic sheep toy which we call Bepjabbah on our fridge, and we realised the other day that ThingOne now knows Bepjabbah by name. What rubbish are we teaching the poor girl?

As we near Christmas, ThingOne seems to have got a virus called "Slapped Cheek". She's very coldy, and has bright red cheeks. She's also falling asleep a lot and wanting lots of cuddles (not like her at all!) Poor thing. If she doesn't get better in a few days her first Christmas won't be much fun.
Posted by Stephen at 2:27 pm