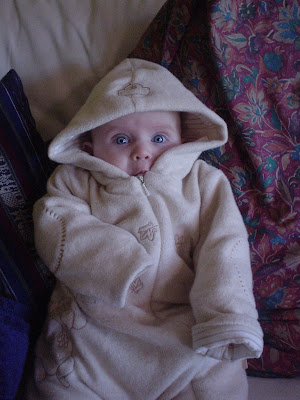 ThingOne's nearly three months old (three calendar months I mean, she hit the three lunar months mark on Wednesday). Has it really been that long? Yes. It has.

She's changed a fair bit recently. Lots of nice smiles and now grabbing at things. She started to go down very easily in the evenings, which meant Anne and I would get a pleasant evening together without worrying that she'd be awake and crying soon. Fairly consistently she'd be up once in the night for a feed, at some point between 11.30pm and 4am. Consistently unpredictable. 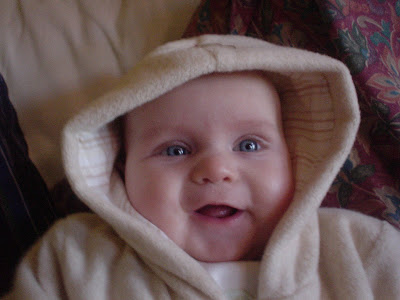 Then, around the ten week mark, she dropped her night feed and was sleeping from 8pm through to sometime between 6am and 8am. It was amazing! Anne and I really hoped it would continue, and it did. For nine consecutive nights.

Last night though it fell apart a bit. She wouldn't settle at 8pm, and then was up at 3.30am for a feed. In addition, Anne was ill all night, which may have been connected. Perhaps ThingOne was off her game due to her mum being ill? She took a fair while to settle tonight too, so I'm expecting another night feed tonight (though it'll be Anne giving her the feed, not me). Let's hope the previous NINE NIGHTS weren't a fluke and we get back to the bliss of a good night's sleep soon. 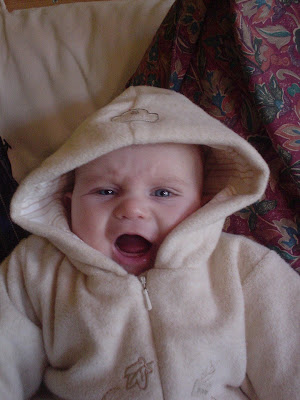 In general, ThingOne's being a little angel. She's very pleasant to be around, and is a pretty happy baby. That makes it sadder when she cries and cries and cries, since we think something must be wrong (whereas before we just accepted she'd cry for no reason some times.)

All the other babies from our ante-natal class are giggling already, and ThingOne isn't. ThingOne's the youngest, but only by a few days. Anne and I are desperate to get a giggle out of her, so we've been looning around a lot to try to make ThingOne laugh. A friend suggested that perhaps ThingOne is more highbrow than us, so I'm going to start reading her some Oscar Wilde quips. I should at least get a wry smile from her.
Posted by Stephen at 10:08 pm