A few weeks ago Anne and I went to a five year old's birthday party. Given out impending parenthood, Simon and Kate had thought we might like a taste of what they have to put up with day in day out, so invited us to their son Sam's party. It was fancy dress, with a superhero theme.

Sam, who likes The Incredibles (as do I) went as Dash. His two year old brother, Nathan, went as Noddy. Not really a superhero, but I let it pass with just a stern word. We had to decide on costumes. We don't have a lot of imagination so it was a bit of a strain. Here's me with Nathan: 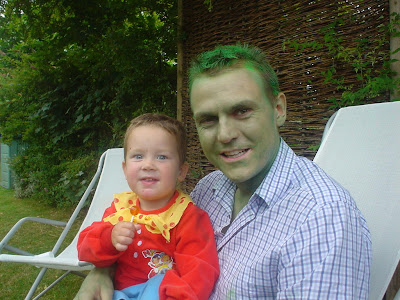 That's right, I was The Hulk! The funny thing is, Nathan didn't seem to think it odd that I was green from head to toe. (Less than a week later, the area of Birmingham we were in was hit by a "tornado". No one seems to have connected the extensive damage with The Hulk's appearance, so I'm keeping quiet.)

Anne's was slightly less exciting and went as Catwoman. Julie-Newmar-era Catwoman, you understand, not Halle Berry. 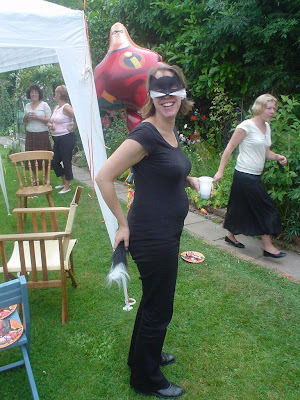 I have to say, it was slightly exhausting with all those kids running around everywhere. It's a good few years before we have to put up with kids of that age, so perhaps we'll be better equipped to cope by then, but Anne and I had a great time as some of the few adults there withoput any real responsibilities.

I went on the bouncy castle and I had ice cream.

Most of Sam's school class were there and he had lost of gifts. Some of the gifts were pretty good, and I look forward to my kid getting presents I want to play with. However, some weren't so good, and I look forward to upsetting my child when I tell him/her that he/she can't have the latest plastic tat his school friends are raving about.
Posted by Stephen at 10:28 pm