As some readers may know, I'm not the world's biggest fan of driving. Now that we have moved to the middle of nowhere, I am obliged to drive the car sometimes. Wednesday was one of those times. We were going to the monthly film quiz in Archway, so I had to leave work, pick up Stephen and then head for London. I've done this journey hundreds (twenty) times before, I'm relatively (not) confident about doing it.

I was hurtling (60mph) along the A505 when from the hedgerow, merely 1m from the road, a deer emerged. I remember thinking "What's that? Oh, a deer. Why is it running towards me?" Then I braked. Thankfully, the deer had passed the front of the car by that point. Ridiculously, a second kamikaze deer was a couple of metres behind the first one, and it slammed into my front wing and bounced of the passenger side door. I don't think I swore (much). 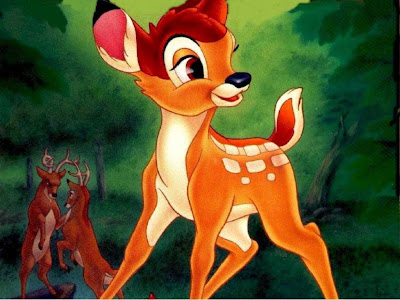 I managed to drive on a bit (whilst the man behind me loaded the venison into his boot) and pulled into a lay-by. As I pulled in I started shaking uncontrollably. I then rang Stephen to inform him that I'd ruined his new car. He was very nice about it and better not bring it up in any arguements.

After a small cry, I drove to Melbourn to pick him up and we managed to get down to London for the night. Yes, London, where you travel on public transport and there are no frigging deers! Bloody Sticks.
Posted by Anne at 1:58 pm